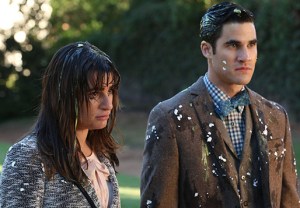 Friday’s Glee formally introduced viewers to “America’s newest male” Sheldon Bieste, or as Sue prefers to call him, “Newly Boob-less.” But while some characters embraced him with open arms, others opted to embrace him with open egg cartons.

I’m speaking, of course, about the d-baggy members of Vocal Adrenaline, with whom Will has finally become fed up. Following the assault on Bieste’s car, Will even worked up the courage to kick one of them out of the group — that guy Clint with the sometimes-accent, played by The Wanted’s Max George — but it didn’t take long for the higher-ups at Carmel to reinstate him.

Will hoped that a last-ditch performance by Unique — backed by a logistically dizzying choir of 300 trans people — might show his students the error of their ways, but when it became clear that they’re beyond hope, he resigned from his position at Carmel and rejoined the New Directions team as an “alumni consultant.”

HOUSE PARTY | In an attempt to cheer Rachel up after her childhood home was sold, Sam organized a classic New Directions basement party, and in keeping with the tradition of adults at McKinley High spending an inappropriate amount of off-campus time with their students, he invited all five of the newbies to join the fun. Of course, the real party happened in Ms. Berry’s bedroom, where she and Sam got down to business (and how could they not fool around after reminiscing about Sam’s sparkly gold Rocky Horror shorts? Those things were iconic.) 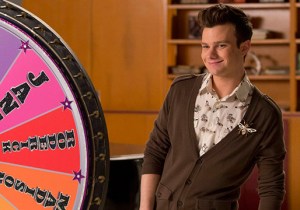 SO KLOSE! | By rigging Artie’s wheel of musical fortune, Kurt snagged himself another opportunity to sing alongside his ex-fiancé, but he ended up getting a whole lot more than that; after reminiscing about their first duet, Blaine pulled Kurt in for a big ol’ kiss! But while it seemed like this would trigger the reunion Klaine ‘shippers have waited for all season — especially after Blaine finally broke things off with that human plot hole known as Dave Karofsky — they’ll have to wait a little while longer. Blaine arrived at McKinley just as Kurt and Walter were heading out on a double date with Sam and Rachel, leaving him more pressed than his collection of colorful sweaters. (Follow-up question about Karfosky, by the way: Is that “clumsy fat-ass” Craig a high school student? If so, why would he be slipping him his number? I think I need to have a few words with Lima’s superintendent.)

And now, we play the rating game…
Vocal Adrenaline: “You Give Love a Bad Name” — Rating: B+
Will and Unique: “Same Love” — Rating: C
Mercedes and Roderick: “All About That Bass” — Rating: C+
Kurt and Blaine: “Somebody Loves You” — Rating: B-
Rachel and Sam: “Time After Time” — Rating: B+
Unique and the trans choir: “I Know Where I’ve Been” — Rating: A

OK, time to talk back: Were you bummed we didn’t get the Kurt-Blaine reunion we’d been waiting for? Are you finally warming up to the idea of Sam-Rachel? And what are you hoping to see at next week’s big wedding? Drop a comment with your thoughts below.