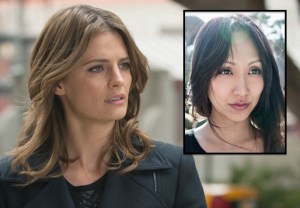 Following Castle‘s late-February “mission to Mars,” Detective Kate Beckett will fall back to Earth, partnered with a fellow femme who’s even better at crimefighting than she is.

Series boss David Amann tells TVLine that in this season’s 17th episode, to air sometime in March, Star Trek: Enterprise alum Linda Park will fill the role of a hot-shot Hong Kong cop that Beckett “is paired up with, somewhat unwillingly.”

Amann describes Park’s Inspector Zhang as “kind of like Beckett, except even better, so that puts Beckett in a bit of a tailspin, to be dealing with somebody who in her eyes is more accomplished and proficient.”

Since her four-season run as Enterprise Ensign Hoshi Sato, Park has appeared on such TV series as Women’s Murder Club, Starz’s Crash, The Mentalist, NCIS and, most recently, Legends.

Castle continues Season 7 this Monday at 10/9c, with the conclusion of the “Resurrection”/”Reckoning” sweeps two-parter.