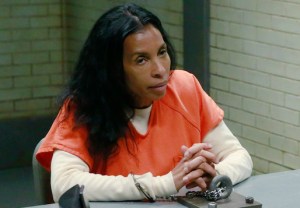 This week on ABC’s Scandal, the Olivia Pope was put on the auction block, to be sold to the highest bidder — all as both the White House and the Gladiators endeavored to grab her first. In the end, who laid claim to POTUS’ girlfriend?

With bidding about to commence on the “dark net,” on a ghost site that only the creme de la scum can access, Olivia assured Ian that she’d fetch more than the “insulting” $500 million that he suggested. Rather, she’s sure to command “not a dollar less than a billion.” Alas, their handshake deal for him to weed out the more sordid bidders came to an abrupt end when Gus, the “prison” guard Olivia bludgeoned during her escape, put a bullet in Ian. In doing so, he took control of the auction (and improved everyone’s share by 8 percent!).

Meanwhile, as the CIA worked on a plan to find and extract Liv, at OPA Huck, Quinn and Jake plotted to get in on the bidding, using Huck’s $2 billion in “back pay” from B613 (aka the nickels and dimes the spook group siphoned from government budgets over the years) and Mama Pope’s special brand of all-star terrorist “connections.” But to “pay” Maya’s contact to get her an invite to the ghost site, Huck needed to snuff a few goons — which he did and then some (ergo the “violent content advisory” for the episode). Afterward, Jake worried for Huck’s well-bring, but Quinn shrugged it off: “He is going to be fine.”

Over at the White House, Cyrus prepped the paperwork to sack Fitz’s shady Secret Service agents and replace them with SEALs, as well as fast-track traitorous Andrew’s resignation for “health reasons.” The veep, though, won’t be so easily dismissed, threatening to take Fitz and his girlfriend-instigated war with him. Fitz tasks Cy with proving the VP faked his near-assassination and thus triggered the war himself. But when Andrew gets wind of that, he threatens to expose Mellie’s affair with a traitor — and FLOTUS can’t have that, she tells Fitz in a quiet moment on the balcony, because what she wants most in the world… is to one day become president herself.

Elsewhere, Abby railed at David (because it seems like somebody has to, once per episode) for keeping Olivia’s abduction a secret, after Fitz read her in on the siutaion. Mr. Attorney General argued, “You did not have a right to know,” to which Abs responded, “Someone kidnapped my best friend! My only friend… And I didn’t even get chance to be her gladiator,” since Huck and Quinn froze her out earlier. David tried to assure her that Liv’s not her  “only friend,” but it was cold comfort.

Back at OPA, Huck finally gets into the auction, but just then, all bidding is suspended. And back where Liv is being held, Gus gloats that he brokered a backroom, all-cash deal to give her to Iran. (As he rationalized, “You smashed my head open and killed my best friend [Otto] — who did you think I’d sell you to?” And as Fitz rallies Cyrus to do everything possible to thwart this trade, lest the 43 soldiers who died in the West Angola conflict have done so for nothing, a hooded Olivia is delivered to the roadside hand-off, the identity of her actual buyer teased in the promo to be shocking-esque. (Is Rowan in one of the tinted-window SUVs there? If not, who else could it be…? Did Stephen win a lottery and move to Tehran?)

What did you think of “She’s a Murderer”?