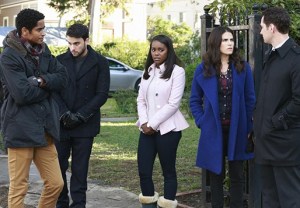 All eyes will be on Annalise Keating and her increasingly jittery students on tonight’s How to Get Away With Murder (ABC, 10/9c), and the truth about Sam Keating’s death could become as poorly concealed as his recently unearthed remains.

“The house of cards comes tumbling down,” said Katie Findlay, who plays Rebecca — one of seven people (along with the Keating Four, Annalise and her right-hand man Frank) involved in the death, disposal and coverup in question. “Everything falls apart humongously, and you see who’s doing what and who’s been lying. Rebecca is all about staying out of jail. She’s all about Wes staying out of jail, because she needs him and loves him.”

That love, though, will continue to take on a very strange — and potentially unhealthy — form, as Rebecca shifts from being the protected one to the protective half of her relationship.

“In the beginning of Season 1, you got to see Wes as a stabilizing factor for Rebecca,” Findlay said. “And the interesting thing about the back half is that you see her version of caring for someone, her version of nurturing someone. Which is a little weird, but it’s kind of cute. She’s trying.”

Don’t be fooled, however, by Rebecca’s affection for Wes; it doesn’t mean she cares about the other students’ fates now that the police know Sam isn’t on the lam, but is in fact, a murder victim himself.

“I’m deeply affected by the discovery, because it means my island of safety could be jeopardized,” Findlay added. “Everybody else? Eh.”

Wes, of course, was the one who struck the fatal blow as Sam tried to strangle Rebecca — and he’s been suffering from nightmares ever since. His three classmates who were on the scene — and helped with cleanup, have woes of their own: Michaela’s odd behavior caused a rift (and a postponed wedding) between her and fiancee Aiden; and Connor’s car — the most incriminating piece of evidence in Sam’s disappearance — is MIA. Even Annalise herself, who promised to help her pupils get away with murder, is dealing with Sam’s suspicious sister, Hannah (Marcia Gay Harden).

One person who will remain oblivious in the wake of the police finding Sam’s charred remains is Asher, the only member of the Keating 5 not present on “Murder Night.” And that won’t change right away, according to his portrayer Matt McGorry.

“The Keating Four, under Annalise’s advisement, handle it pretty well in a way that doesn’t immediately allow Asher to have suspicions,” McGorry said. “But he’s the biggest liability in that home. If anything seemed out of place to Asher, I worry for the rest of them that he might do what is right.”

Got any predictions for tonight’s HTGAWM episode? Hit the comments!