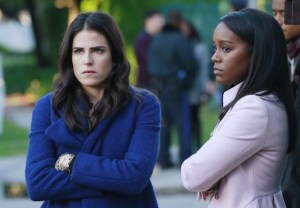 We begin this week’s How to Get Away With Murder recap with a quiz ripped straight from the pages of Cosmo (or is it Allure?) titled, “Are You Losing Your Damn Mind?” Let’s begin!

1. Your girlfriend was recently cleared of murder charges by your ethically challenged defense-attorney boss. Over time, you learn her former neighbor (AKA the previous occupant of your apartment) left claw marks on his bedroom wall, was carted off by police (thanks to your girlfriend’s 911 call) and ultimately disappeared without a trace. You react by:
A. Cooing, “Baby, I’ve got nothing but trust for you!”
B. Googling missing dude’s name in your limited free time.
C. Praying you got all your DNA evidence off the dude you murdered defending said girlfriend (who just so happens to be your boss’s hubby).
D. Hopping the nearest bus to the west coast, changing your identity and hoping nobody manages to track you down.

2. You’re a disgraced cop with a terminally ill wife. Your ethically challenged defense-attorney girlfriend rekindles your affair on the night her husband goes missing. When his charred, dismembered body turns up in a landfill, you:
A. Buy a burner phone you can use to communicate with your lover.
B. Follow your girlfriend’s advice to not speak to anyone on the force unless they take you into custody.
C. Engage in sexy phone conversations where you coyly refuse to answer questions like, “Do you think I did it?”
D. Call your closest friend on the force and tell him or her everything — so you’re out ahead of the story.

Of course, HTGAWM‘s Wes and Nate are the subjects of Questions 1 and 2, and neither of ’em manage to pass his respective test. But they’re not alone: As the events of Murder Night sink into the minds of Connor, Michaela, Laurel, Rebecca and even Bonnie, we see them all defaulting to varying degrees of unhinged. Things are so bad, in fact, that even the mighty Annalise Keating ends the hour in bed, in the fetal position, and weeping “Mama, I need you” into the phone.

And that’s leading me to a very scary thought: Unless Annalise is 10 times smarter than anyone in the room at any given time – including Sam’s verrrry agitated sister, the stern lead-detective lady and everyone else she’s bound to encounter between now and the Season 1 finale — some innocent-ish soul is going to pay a brutal price for what was essentially a crime of self-defense.

Let’s recap the action from “She’s a Murderer”: 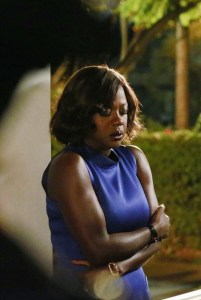 THE HANNAH PROBLEM | Annalise and Hannah ended last week’s installment with a détente over roasted chicken; midway through this week’s episode, A.K. is accusing her sister-in-law of an unseemly obsession with Sam, sneering, “Incest is best — put your brother to the test.” (Uh-oh… somebody just got crossed off somebody’s else’s Christmas card list!) All it takes for things to go so south so quickly is Hannah learning Sam’s not on the lam, but in a landfill. “She killed my brother! Arrest her, damnit!” the unhinged sibling cries to the cops who’ve come to break the news to a comparably stoic Annalise. Hannah’s not totally off the mark, of course, seeing how Annalise masterminded the disposal of the corpse, and she’s smart enough to realize she’s going to have to play a little dirty. “What if she threatened Sam’s life? I’ll testify to whatever you need me to.,” says Hannah to the lead investigator (while also implying that Annalise grew up in a violent environment). “Search that house!” I imagine the scene playing out in Hannah’s mind isn’t far from the truth: Annalise scrubbing away traces of Sam’s blood with bleach (a desperate moment we see later in flashback). When Bonnie goes to court to try to stop the search of Keating HQ, Hannah shuts her down with open disdain — sneaking in a story about Annalise having once hurled a paper weight at her brother at the end of a tense cocktail party. But it’s a short-lived win for Marcia Gay Harden’s icy alter-ego: Thanks to Annalise’s elbow grease, there’s no trace of blood anywhere in the home. All the fuzz finds are the pesky scales that are supposed to be attached to the “How to Get Away With Murder” class trophy — a fact that’s not lost on Lurky McChurchmouse. Which brings us to… 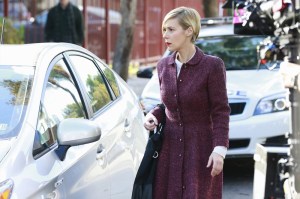 THE BONNIE PROBLEM | Along with her ability to scurry silently undetected through every room in Annalise’s home, Bonnie also has the power of deduction on her side. And once she learns Sam died of blunt-force trauma to the head, that Scales of Justice statue starts looking like a good candidate for the murder weapon. But wait! There’s more!  The police found carpet fibers and woodland debris with Sam’s corpse — and it doesn’t take a masters in interior design for Bonnie to notice that Annalise’s office seemingly dragged itself back to the Angela Adams showroom on Murder Night. She finally presents her case to her boss, telling Annalise that she’s not going to get away with it, that she knows that she’s doing it to cover for the Keating 5, and adding that Hannah loved Sam too much to not solve the case. “Don’t let them ruin you,” implores Bonnie, who appears more interested in keeping Annalise out of the clink than she is in bringing Sam’s killers to justice. And speaking of that quintet… 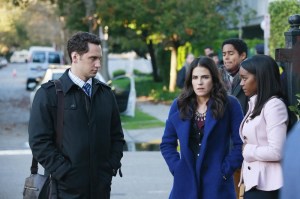 THOSE MEDDLING KIDS! | Annalise has a fantastic moment where she changes the agenda for her classroom and talks about the fifth amendment, which she boils down to a crucial six words for Laurel, Connor, Wes and Michaela: “When in doubt, shut your mouth!” But it’s Connor, moreso than his co-conspirators, who can’t shake the terrifying idea that Annalise is setting ’em all up. After overhearing one of several freakouts, Annalise calls He Who’s Overdue for a Risqué Sex Scene to her office and tells him to tell her to his face if he thinks she’s a bad person, heartless and a sociopath. Connor pleads that he wants to trust his professor/boss/protector, but it’s not coming naturally. “You’re not gonna trust me — that’s just not in your nature,” Annalise responds flatly. But then she adds this kicker: She’s his only option — so his trust isn’t required — merely his obedience to her plan. “The odds are better with me,” she offers, and it kinda makes sense. Trouble is, after Bonnie’s real talk, Annalise is conflicted. We see her swilling vodka — a beverage that is supposed to make you dance in your living room to “Chandelier,” but instead makes She Who Found Sam’s Penis on a Dead Girl’s Phone weep and remember the promises she made to protect her students. She picks up her flip phone, dials, and declares to someone we can’t hear or see: “I need you right now.”

The morning after — the police find evidence of where Sam’s body was burned in the woods — along with a ring. Michaela hears this rumor via Rebecca (who somehow has contacts inside the Philly PD?!) and a panic attack sets in. But it’s not her missing diamond after all, we learn when Annalise goes down to the station for questioning. It actually turns out to be Sam’s wedding band — containing a fingerprint of Nate’s lifted and transferred (presumably under Annalise’s directive) by Frank! Is Annalise really selling out her married lover to save the kids? Or is it all part of some larger, overarching plan where she’ll make sure everybody (Nate included) walks away free? I’m fearing based on Annalise’s end-of-hour breakdown — and subsequent call to her mommy — that she might actually be making Nate the patsy. Who knows? Maybe she’s mulling that brilliantly cheesy offer from her Mob boss client this week: “Chocolate and Italian wine always pair well together.”

IN OTHER NEWS | The case of the week isn’t really noteworthy — except that by accepting it, Annalise makes herself look unsympathetic to the cops. “You gonna arrest me because my grief doesn’t look the way you want it?” she grumbles, in one of her more “right on!” zingers of the week. Oh, and the prosecutor on the case implies a couple of times how his cooperation will ultimately make Annalise’s case easier — a bridge she sets ablaze after exposing his prosecutorial misconduct. And finally, there’s Wes’ growing obsession with the previous occupant of his apartment. When the building super lets slip that the dude disappeared without his deposit — shortly after Rebecca had called the cops on him — you can see a lightbulb flicker dimly over his head. But then once again he’s overcome by Rebecca’s charms. “I can still tell them it was all me!” she says — because making a not-entirely-truthful confession to police is easier the second time around. Wes won’t hear of it, though, and even though deep down I think he knows those claw marks should be accompanied by “Rebecca Wuz Here” graffiti, he tells her he does trust her, and their disagreement is put to rest. (Side note: I’m gonna put 2-1 odds on Rebecca being Lila’s true killer, with Annalise a close second choice at 5-2.)

As I Google whether or not there’s a Vegas linemaker taking wagers on the identity of Lila’s killer, I turn things over to you. Is Nate going to take the fall for Sam’s death? What’s Rebecca hiding? What other wild theories are percolating in your heads? Sound off below!