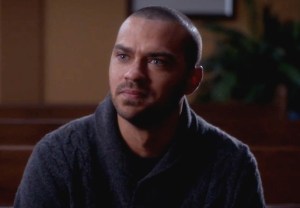 It’s a miracle. Though, as anticipated, Grey’s Anatomy put us through the wringer right along with April this week, the episode in which her and Jackson’s baby was born — and died — still managed to feel, weirdly, uplifting. Read on, and see if you don’t agree.

TEST OF FAITH | Early on in “All I Could Do Was Cry,” Herman explained to the Averys what it meant that their son had Type 2 osteogenesis imperfecta. Understandably, April was horrified by what she was hearing. “My baby’s bones are breaking inside of my belly,” she asked in disbelief, “the place he’s supposed to be safe?” Afterward, the mom-to-be wasn’t sure that she had the strength to do what needed to be done. Catherine reassured her that she did, and laid out a sensible, sensitive plan (pick a date, induce labor, name the baby, baptize the baby and “memorize every little detail of his face” until he passes away), but April appeared to retreat into denial. “Maybe,” she said hopefully, “God won’t take him.”

Next, when she and Jackson met with Herman to fill out consent forms — and were given a death certificate to sign! — April only dug in her heels more deeply. Even on the day that Herman was scheduled to induce labor, April couldn’t bring herself to give up hope. First, she stretched out her and Jackson’s discussion of a name (shooting down Norbert, the moniker of her husband’s favorite uncle); then, she put off putting on her hospital gown; and finally, she flat out refused to go through with the procedure. Instead, she was going to go back to work and hope for a miracle. “This isn’t fair. It isn’t just,” she told Jackson. “And I have spent my life believing in a God who is just.” She followed His calling to be a life-saver, was becoming the person that He meant for her to be… “and then this… to be handed this?!? It’s cruel, and I feel like God is laughing at me. If this is a test, I fail.”

SHOWS OF SUPPORT | Throughout the episode, the Averys’ friends struggled to think of something, anything that they could do to ease the couple’s suffering. Arizona, for her part, was eager to be their go-to doctor. “I wanna make it as nice for them as it can be,” she told Herman, “and you’re not nice.” (Of course, that was exactly why Herman was the better choice for the Averys — she could concern herself only with their feelings, not her own.) Amelia, drawn back to her loss years ago on Private Practice, suggested that, rather than attempt to cook a casserole or send flowers, everyone light a candle in the chapel. Other than that, “You can all just give them privacy,” she said. “That’s what they’re gonna want.” The doctors’ subsequent visits to the chapel were alternately funny (Owen and Alex had no idea what they were doing) and dark (Stephanie confessed to Jo her fear that, because she’d wished misery upon her ex and April, she’d brought this on them). Yet all of their prayers paled in comparison to Jackson’s. “God, Yahweh, Buddhah, E.T., whatever… show up for [April], please,” he begged. “She loves You. She needs You.”

CHANGE OF HEART | While all this was going on, Mer ran around trying to find 1) a doctor be on call in her place that weekend and 2) a babysitter for the kids, so that she could fly to D.C. and have “emergency sex” with Derek. After being given the cold shoulder by Catherine, Richard offered to be on call, and after being passed over by her half sister again and again, Maggie (in the sweetest of all possible ways) volunteered to babysit. In another plot, Amelia appalled Stephanie by practicing the technique that she’d eventually use on Herman’s tumor on a flirty blind patient even though she didn’t think that she could restore his sight. (Ultimately, he did see again. But even if he hadn’t, Amelia yelled at Stephanie, doctors have to be able to try even when it seems hopeless, or they’ll never succeed.) Nearby, a woman who’d been accidentally shot by her husband gave birth to the baby they desperately wanted but had been told they couldn’t even conceive. And a spacey intern was revealed to be not an intern at all but the fiancée of a patient who’d died the night before. She’d been given scrubs to wear instead of her blood-spattered clothes and just… hadn’t been able to bring herself to leave. “You can survive this,” April told the woman and, in a way, herself. “You are strong.” Afterward, Kepner and Avery settled on the name Samuel Norbert, and since April “got what [she] was waiting for,” she allowed Herman to induce labor. What followed was a singularly lovely, heartbreaking scene in which the parents held their doomed newborn, compressing a lifetime’s worth of love into a few short moments. “He squeezed my finger,” April whispered, “and then he let go.”

END OF DAY | As the tearjerker drew to a close, Arizona thanked Herman for being there for her friends, Catherine closed the gap between herself and Richard, asking, “Can you just take me home… take me to bed and just hold me?” and Amelia discovered that every candle in the chapel had been lit. “My baby lived for 43 minutes,” she then confided in Owen. And, without a word, he just took her hand. Good stuff. Great episode.

OK, your turn. How impressive were Sarah Drew and Jesse Williams — and, while we’re at it, Debbie Allen? Catherine’s last scene with Richard really choked me up. And you?