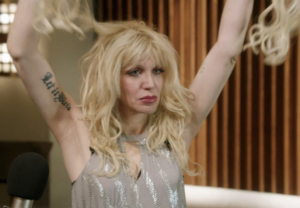 From the moment she makes her first appearance on Empire, we know Courtney Love’s Elle Dallas is a badass force of nature— mainly because she disrespects Cookie Lyon (to her face!) and doesn’t wind up getting a beat-down with a broom.

But while having 150 million in record sales will still get you all the air kisses you can tolerate, there’s a footnote at the bottom of every major-label record deal of which Elle is acutely aware: Any accomplishments not achieved in the last 12-24 months might just as well never happened at all.

Elle may stamp her feet and seethe that she single-handedly kept the lights on at Empire Entertainment when the company was in its infancy, but her bravado is simply another layer of dime-store armor covering up her wrecked voice, her crippling drug habit, her lack of artistic drive and her desperate fear of irrelevancy. And so when Cookie finally confronts the fading diva during a disastrous studio session and asks her to drop the act — along with her false eyelashes, her hair extensions and her pounds of makeup and jewelry — the resultant electricity is like Dr. Frankenstein jolting a pulse into his monster. She’s alive — and y’all better be afraid! (Yes, Boo-Boo Kitty, that was directed at you.)

The scene is — all hyperbole aside — perfection. We have Cookie, the ex-con whose 17-year prison sentence serves as Empire’s foundation, pleading “It’s do or die for me, too.” We have Elle, back at the microphone with all the trepidation of a neophyte but also the freedom that comes from letting herself admit she’s scared. And then we hear it: Love’s trademark howl, which has only grown more weathered and weary since first warning us on “Doll Parts” (more than 20 years ago!) that “Someday you will ache like I ache.” Suddenly, the voltage is coursing through Cookie’s veins, too. These two women might be battling against an industry that’s ready to toss them to the curb, but — united by their love of the music —now they’re battling as a team. And that makes the fight a heckuva lot more intriguing.

Of course, Cookie is a master multi-tasker — which means she’s got a lot more to do this week than busting into Elle’s seedy motel room, flushing her stash (and her glazed-over lover) and cradling this broken woman in her arms. So let’s recap the rest of the action from this week’s installment, “Out, Damned Spot.” 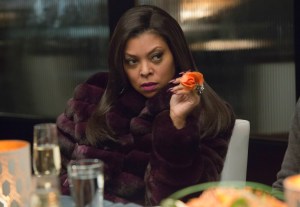 “OH, AND ANIKA, THIS IS AN ASS!” | This week’s opening scene pretty much sews up every single award for Best TV moment of 2015. Cookie agonizes over her look, finally chooses a sable coat, and meets Lucious at a fancy restaurant — only to realize it’s not a followup to the rose he gave her on their wedding anniversary. Instead, he’s called the entire family together to announce his engagement to Anika. Cookie sips loudly and destroys a flower while Anika waxes poetic about her diamond, ’til Cookie can stand it no longer. She hurls her mangled rose at the happy couple, then opens her coat, reveals she’s only wearing skimpy blue lingerie underneath her fur, and hisses, “You think I came here dressed like this for a friendly get-together?!” Cookie storms to the exit, but as is her wont, drops one more zinger on the way out: “Oh, and Anika,” she says, lifting her coat again and flashing her backside, “This is an ass.” Oh, and America, that is how you make an exit. (Slow clap for Ms. Lyon: Yes, she was giving ’em bahhh-dayyy.) 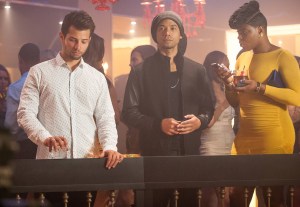 IS THERE ENOUGH ROOM FOR A COOK AND COOKIE IN THE KITCHEN? | As Jamal and Cookie plan to launch his fantastic single, “Keep Your Money,” Cookie warns Michael that fame changes people — and he’d better make sure he has his own thing going on. And while Anika feigns disinterest — “When can I hear a finished version?” she asks coolly, pretending the hot-like-fiyah track is just a demo — Cookie knows there are other ways than the Empire promo budget to break Jamal to a wide audience. She gets the record played at a club — and then convinces a football player with 5 million Twitter followers to be the first to endorse the sure-fire hit. He only does it because he finds Cookie and Porsha hilarious — what I wouldn’t give for a summer sitcom spinoff with these two gals! — but she also uses the event to undercut Jamal and Michael’s relationship. “I hope one day you find a partner that is on the same level — somebody that has their own career, their own ideas, somebody who can bring something to the table besides some damn food,” she tells Jamal of his culinary student partner. It seems unnecessarily cruel for Cookie to deny her son’s happiness, but I maybe, knowing how ugly the game is, she somehow is protecting him?

Later, when Jamal plays a set for an Internet show hosted by Sway (“Keep Your Money” > “I Wanna Love You,” BTW) he dodges questions about having a girlfriend, instead fumbling that there’s “no one special” and that he’s “in love with the music.” It’s a stinging rejection for Michael — who seems genuinely happy although a little insecure about his man’s success. But if such ugliness leads the show’s writers to explore Michael’s personality — or to give him one — then perhaps this setback isn’t such a bad thing. And even if we hate the internalized homophobia and “keep it in the closet” mentality Jamal is clinging to, it’s also what any young R&B artist would face in 2015, no? Exploring it doesn’t equal endorsing it.

As Jamal’s music heats up, he also gets up the courage to brush off bratty Hakeem and his requests for help in coming up with a hook for his newest song. “How long did you think I’d sit around and let you disrespect our mother, when all she’s trying to do is help you grow up?” Jamal says, and Cookie couldn’t look more proud. Hakeem is channeling all of his personal drama (aka Tiana’s lesbian fling, his sugar mama not answering his calls) into a tart little jam with a chorus that doesn’t exactly celebrate females: “They all phony and that’s why I don’t trust ’em” goes the chorus, making “Drip Drop” sound like it was written by Gloria Steinem. Jamal, clearly Cookie’s son, gives it a withering review: “Write a song about how much you hate women, it makes you look like a little bitch.” Prrrrrreach it!

Of course, Jamal has some female issues of his own. The episode ends with a visit to Empire Entertainment HQ by a messy chica named Olivia (Raven Symone) who demands to get past security and see her “family.” Clearly, she’s someone from Jamal’s past, and when she has her cute little toddler mumble the lyrics to “Keep Your Money,” we can see what’s coming. “She wanted to meet her daddy,” says Olivia. And BOOM — the mic has been dropped and the episode is over. I don’t even know what to say about this, because I’m still processing it. 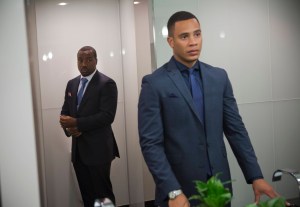 PUTTING THE BUNKY SITUATION TO REST | Lucious finally ‘fesses up to Vernon that he was, in fact, the person who killed Bunky — but his whole, impassioned “He chose his fate!” speech leaves Lucious’ right-hand man unimpressed (and turning to his AA sponsor for counsel about devoting his life to another man’s goals and dreams). Nevertheless, Vernon does his duty — finding a shady lawyer with a client already on the hook for a murder rap, and then convincing the man to confess to Bunky’s shooting, too (the better to score a huge cash payout for his family). But just because Lucious is off the hook legally doesn’t mean he won’t pay for his crime. While Vernon initially chokes out Andre for providing an alibi for his dad, Andre convinces Vernon he spoke up without knowing what he was covering. After they make up — and again hint at some kind of darker master plan — Andre adds this tender little denouement to the conversation: “Put your hands on me again, I will slit your throat.” I’m less scared of him than Rhonda, though, so at least Vernon can take comfort that that snake-pit viper is not yet getting involved. 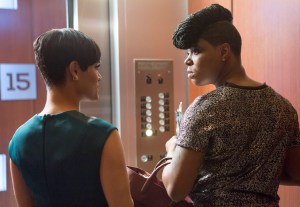 IN OTHER NEWS | Lucious goes on a hiring spree — snagging a “concierge doctor” who gets him enrolled in a Russian medical study for an early-stage ALS drug, and then recruiting a new head of security (Derek Luke) who quickly proceeds to get his flirt on with Cookie. (Lucious is going to hate that development!) Oh, and sneaky Anika teases Porsha that she could be making double what Cookie pays her, but then slips off the elevator without saying exactly what kind of treachery she’s seeking. Here’s hoping Porsha stays loyal to the true Queen of Empire — and that Boo-Boo Kitty uses up another one of her quickly dwindling lives (in terms of the Empire hierarchy, of course).

On that note, I pass the mic to you. What did you think of this week’s Empire? Did you love Courtney Love? Do you see any way Jamal and Michael can make it work? Will Porsha turn against Cookie? And how about the baby revelation? Hit the comments with your thoughts!