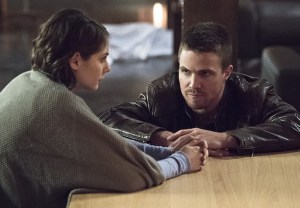 This week on The CW’s Arrow, Oliver and Laurel each debated the decision to disclose potentially damaging truths to loved ones — in the end, who all ‘fessed up?

There was much to like about “Canaries,” though the titular, well-hyped face-off(s) frankly came up short for me. The fight sequences, because they needed to be one-sided, weren’t especially spectacular. Plus, the similar costumes/wigs made them tricky to follow. Laurel’s best hallucinatory moments instead were the more emotional ones, such as when Vertigo “transformed” into an angry Quentin, or when a proud “Sara” beamed at her sister, from above.

Most everything else in the episode was quite satisfying, namely because what could have been a dreadfully repetitive slog — had Thea taken umbrage at Oliver’s years of duplicity — instead was refreshingly warm and rational, as she saw the value of his alter ego. All those times Thea thought Ollie a flake and or a liar, “You were saving someone,” she observes.

Thea, though, did have a beef with 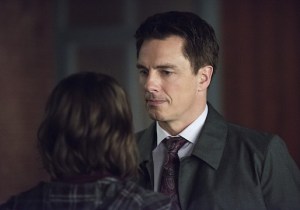 daddy Malcolm, for driving a wedge between her and Oliver, all the while knowing his secret. This conflict set up some interesting conversations — Oliver/Thea, Thea/Malcolm, Thea/Roy — as well as dovetailed into the Team Arrow tension, when Oliver booted Thea from the Foundry.

Now that scene, I had an issue with. Namely, that the team’s declaration of newfound independence was voiced solely by Felicity, while Diggle stood there with his arms folded. I “get” that the words were meant to have an added layer of sting, given that Felicity was coming from the place of a woman scorned. But c’mon. To hear Diggle — who’s already been sidelined from the ops — own half of that oration would just as much socked Oliver.

That shortcoming was thankfully offset by the subsequent scene at the bar, where Diggle laid it out plainly for Oliver: The team has evolved into something else, a cause that can live beyond its founder — so, “Can you live with what it’s become?”

Though the Canary clashes fell short, I appreciate the storyline purpose they served, as Laurel — also informed by a pep talk (and hug!) from Felicity — came to realize that she can’t and shouldn’t be Sara, that she should be herself.

And part of that epiphany, goosed by the vertigo hallucinations, led Laurel to come clean to her father — though at first he thought she was confessing to being the new Canary. She could have sought an out there, but instead she forged ahead and made him realize that Sara had died. Really nice work by Paul Blackthorne in that brief breakdown, as Quentin sobbed, “Not my baby, not again!”

Eventually, after cheating death at duplicitous deejay Chase’s hand, Thea acknowledged Malcolm’s role in their greater mission, to fend off Ra’s al Ghul — though she vows to never forgive him his trespasses. Malcolm then tells Oliver and Thea that to ever face Ra’s, they must first conquer any fears the League overlord may use against them as a weapon. So Oliver bids the team adieu, as he and his sister make camp on Lian Yu….

Meanwhile, in flashbacks: Before fleeing Hong Kong with Tatsu, Maseo urged Oliver to go public with his “resurrection,” to make it harder for A.R.G.U.S. to kill him for the Alpha betrayal. And though Oliver leaves a phone message for Moira, Waller has it erased, she reveals, after abducting him. Maseo later makes the sacrifice to come back for Oliver, thus landing himself back in Waller’s clutches. And as the episode closes, we see she has brought the two men to the site of their next mission: Starling City.

What did you think of “Canaries”?