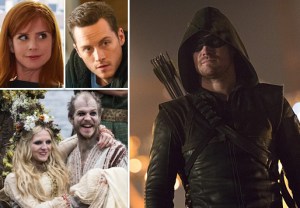 Is Arrow targeting a nip-and-tuck? Which Chicago Fire-men are clashing? Is Five-0‘s Danny still playing doctor? Does Vikings‘ mystery man make an entrance? When will Syfy get Bitten again? Read on for answers to those questions plus teases from other shows.

Apparently Stephen Amell said at the Dallas Comic Con that the Arrow costume would undergo a change this season. Do you have any details? –Ravi
I ran that by showrunner Marc Guggenheim the other day, and after some thought he allowed this much: “You’ll see a wide variety of changes coming for Arrow. There’s a lot that’s happening in the latter half of the year that will require some big, wholesale changes.” Anyone else thinking paisley…?

Will we see any more scenes this season between Hawaii Five-0‘s Danny and Dr. Shaw? They have great chemistry! —Sarah
As a matter of fact, there’s an episode coming up later this season where Danny and the good doc are stuck somewhere unexpected, with a victim who needs processing.

Can you offer any news on Grey’s Anatomy or Suits? —Jonny
Option No. 2 it is! This week’s flashback-heavy episode will “shed light on Harvey and Louis’ backstory” and the origins of their feud, executive producer Aaron Korsh previews. As for Mike, he’s just been kicked out of college, so the glimpses of the past are intended to reveal the “aftermath of that and just to show a progression with his relationship with Trevor and his grandmother.” In the midst of all that, there’s also “some fun Jessica stuff and Donna stuff, and we try to put some little tidbits about the first time various things happened. We actually have a really fun scene, to me, that’s actually the first time Rachel is inside of Pearson Hardman.”

Anything on Chicago Fire? —Quanita
Mills is going to have a beef with Severide after the firefighter’s friend joins the rescue squad. “That really rubs Mills the wrong way because he’s been planning on reassuming that spot,” executive producer Matt Olmstead previews. “He’s waiting for medical clearance to go back, and so there’s some friction there.”

Got any scoop on Kevin Durand’s character on Vikings (Season 3 premieres Feb. 19)? — Katie H.
Before he ever sets foot in Kattegat, the Strain star’s mysterious Wanderer will have piqued the interests of Siggy, Helga and Queen Aslaug, since he appeared to each of them in dreams, arriving in town with his arms outstretched and one hand dripping scalding blood. So you can imagine the reaction when this happens in Episode 2:

Any Inside Line on Shameless? —Yvonne
Things are about to get really messy and complicated for newly married Fiona, given Jimmy/Steve’s return. “She’s in the house with him and then Gus comes over, so the kids are trying to cover for her and it’s very awkward,” executive producer Nancy Pimental teases. “And it’s also really influencing Debbie, too, because Fiona is trying to keep Debbie under control, and Debbie’s like, ‘What the hell? You’re the one that just got married impulsively, and you’re the one who has another guy in your house.'”

Got any scoop on The Flash’s Gorilla Grodd? –Mason
Don’t go ape, but I instead have intel on a pair of other encores — Captain Cold and Heat Wave, who when next seen are accompanied by Lisa Snart AKA Golden Glider. Executive producer Andrew Kreisberg says with a laugh that it’s a treat to watch Leonard “try to be a good big brother to this slightly psycho younger sister,” while Lisa in turn endeavors to “manipulate Heat Wave and his willingness to be a dumb lug for love.” 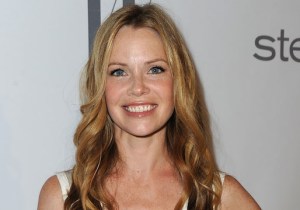 on Rookie Blue, Chicago P.D. or The Night Shift. – Debbie
I choose… Night Shift, since a lotta people aren’t aware that NBC’s sophomore medical drama will be back so soon (on Monday, Feb. 23 at 10/9c). I can report that NCIS alum Sarah Jane Morris has booked a multi-episode arc as war vet TC’s sister-in-law, Annie, who has been in free fall ever since the death of her husband. TC has supported Annie through her hard times and even put her through nursing school, but she may be concealing a potentially deadly problem….

I was wondering if you had any scoop on ABC Family’s Switched at Birth? – Mar
The decision to wrap up the consent storyline with Tank’s expulsion from college was “a very controversial” one, executive producer Lizzy Weiss says. “We struggled a lot in the writers’ room with how to end the story. We finally felt like there had to be some sort of closure. Whether or not it’s realistic, I don’t know. People can argue about that.” And they can take comfort in the fact that we will find out what happened to Tank after he was kicked out of school. “We’ll revisit him in the second part of the season,” the EP reveals.

Can you give me any info on Chicago P.D.? –Miriam
Remember when we told you Halstead’s doctor brother Ryan (played by Nick Gehlfuss) might be staying in Chicago? The reason: he got a girl pregnant! So he has to decide “is he going to stick around and be a dad or is he going off to the next party, essentially,” executive producer Matt Olmstead explains. Meanwhile, another blast from Halstead’s past — a criminal informant named Mouse (Samuel Caleb Hunt) who appeared last season and was in the Rangers with the detective — will return in Episode 16…as the unit’s new tech guy! “It’s a great window into Halstead,” Olmstead says. “He doesn’t go around telling people his life story, but there is a real heroic act involved. This guy saved his ass which is why he’s going to bat to bring in a kid who’s an ex-con to do this job.”

How is Joe Carroll going to factor into this season of The Following? –Chase
Most simply said, out of sight is not out of mind when it comes to those who put the elusive killer behind bars last season. “What I love about this season (premiering March 2) is that the Joe Carroll of it all is behind us,” Shawn Ashmore says, “and yet he’s still so interwoven emotionally where these characters are. He’s always sort of with us, which is nice.”

When is the premiere of Bitten Season 2 going to air in the U.S.? –Raven
Thus far I am able to narrow it down to… the month of April. 2015.