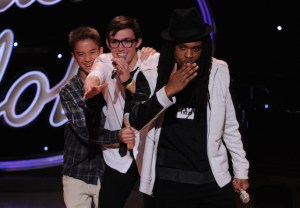 “Can anybody find me somebody to love?”

I posed one of Queen’s most plaintive lyrics for most of Wednesday’s American Idol “Group Rounds” telecast — and unfortunately, only a handful of contestants answered the call. There were forgotten lyrics, cacophonous harmonies, a few instances of face-down-on-the-carpet exhaustion and a smattering of “I didn’t come here to make friends” squawking. But “Holy crap, I want to know that contestant’s 877-number so I can start voting for him/her right this second!” vocals were in short supply.

Of course, for anyone who’s hung around for 14 seasons in the House That Melinda Doolittle Gentrified, this isn’t a surprising phenomenon. For every Frenchie Davis-Kimberley Locke “Band of Gold,” there’ve been a dozen contestants reading off the side of a prescription pill bottle — insomnia! nausea! an inability to operate heavy machinery! feelings of collapse! — in an attempt to explain why they failed to excel when smooshed together with strangers and forced to learn unfamiliar songs overnight.

I guess the last five weeks of Idol — which have hinted at J.Lo, Keith and Harry unearthing an especially deep talent pool this time around — raised my hopes to unrealistic levels. Consider this a promise that your cynical recapper has been rebuked, recalibrated and recommitted to the cause. And on that note, let’s boil tonight’s one-hour show down to the three best, three worst — and two head-scratching-est — moments:

BEST
1. I was really starting to get irked by the extended highlight reel of that girl whose name I’m not going to bother Googling having a meltdown and trying to break free from Team Soul Connection. But I forgot all that mess after fellow group member Sarina-Joi Crowe delivered a scorching twist on Bruno Mars’ “Grenade” — complete with deft twists on the tempo and melody, Tina Turner-esque grittiness and a pair of leopard-print boots worth of Empire’s Cookie (aka She Who Should Be Everyone’s Style Icon/Life Coach/Spirit Animal). No one else I’ve seen this season says “automatic Top 10” to me quite like Sarina.

2. The night’s second act — the quartet of Keri Lynn Roche, Riley Bria, Emily Brooke and Jake Black — got set up via “Oh, no! Emily’s got a case of the voms!” backstory. But their effortless vocal blend and quiet soul on “With a Little Help From My Friends” made them the most obvious “you’re all advancing!” quartet of the season.

3 (tie). I’m not quote sure why Karla Davis and Kory Wheeler got cut — the producers really didn’t give us enough evidence to be able to make an informed decision — but their cohorts Lovey James and especially Jess Lamb utterly made me hear “All About That Bass” like it was touching my ears for the very first time (and that’s no small accomplishment).

3 (tie). Tanya Mackenna received a lot less audition-round attention than Rocky Peter, but by the time “Rocky’s Crew” had finished mangling “Come and Get It,” it was clear Tanya was the only member of the group with the chops to go on. And despite her lack of Tragic Backstory (TM), the judges made the right through and made her the only survivor of the four-vocalist pileup.

WORST
1. How in the name of J.Lo’s exposed midriff did Alexis Danielle Granville — She Who Ended Last Week’s Episode With a Panic-Attack Collapse — get a pass to the next round? I mean, not only does this young lady clearly not have the emotional strength to survive the pressure cooker of live shows, but she treated Train’s “Drive By” like a hyena picking away the last bit of meat off a gazelle’s bones. Sure, Sal Valentinetti cheesy Sinatra impression wasn’t great, either, but it had to sting to have the judges throw a lifeline to his weakest group member while he was left adrift. (Also: This group gave us the first sign of weakness from Jax — and now I’m a little scared.)

2. I feel for Rocky Peter that he’s homeless — I really and truly do. But I think Idol — and all reality competition series — need to help young talent understand that even advancing to the voting rounds will not automatically put a roof over the head of yourself/your mother/your child/your adorable puppy.

3. I’m fine that the judges didn’t cut Joey Cook for the crime of forgetting her lyrics, but I’m not sure Harry Connick Jr. necessarily needed to praise her so aggressively for covering what was, any way you slice it, a pretty major mistake.

HMMMMMM
1. I might catch flack from fellow Belmont University grad/Reality Check cohost Melinda Doolittle, but Blvd. (that quartet from her alma matter) was not as good on their rendition of “Since U Been Gone” as the judges claimed. Rayvon Owen’s high note was like a skeet — it flew high, then exploded — while the entire arrangement sounded a little too high for Piper Jones’ comfort zone. (Also, how come the producers didn’t bother to I.D. the group’s fourth member? Maddening!)

2. Similarly, I wasn’t as enamoured of LKYCO (Ladies Keep Your Clothes On) — or to be specific, the relentless ad-libbing and frilliness they brought to “Story of My Life.” I should clarify that Savion Wright’s big notes were pretty sublime, but Qaasim Middleton and Trevor Douglas need to look up the word “restraint” in the dictionary — then apply said definition to their vocal stylings.

3. All season, I’ve been spilling haterade over Shannon Berthiaume. But her scratchy-beautiful riffing on “Somebody to Love” has me rethinking everything I’ve said all season on Reality Check. (Remember: It is an Idoloonie’s prerogative to change his mind!)

On that controversial note, I pass the mic to you. What did you think of this Wednesday’s Idol? Who were your faves? Who’d have gotten your “veto”? Sound off in the comments!