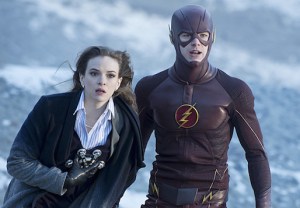 This week on The CW’s The Flash, as Barry struggled to take things not-too-fast with Linda Park, the S.T.A.R. Labs team took Firestorm’s temperature and Joe uncovered a most unbelievable clue about Nora Allen’s murder.

Lots happened this week, so let’s break it down, simple-like (or as simple as one can be when talking about nuclear fission):

THREE’S A CROWD | When not trying to over-worry about (ahem) “going” too quickly with new girlfriend Linda Park, Barry was interrupted by work, as the Ronnie/Firestorm situation heated up. Receiving these mixed messages, Linda picked Iris’ brain about Barry’s mindset, and Iris suggested he was not over an “unrequited love.” Barry confronted Iris about derailing his new romance, going so far as to allege that he has those feelings for her no more. He then proved (with a rather silly display) his commitment to Linda, rekindling their nascent romance — as a forlorn Iris looked on from afar.

S.T.A.R. LABS VS. FIRESTORM | After Dr. Martin Stein aka the “brains” of Firestorm accidentally roasted a college chum mid-consult, Wells asks Caitlin if she is on board with what needs to be done, since they’ve neutralized other metahumans for less. The Flash and Firestorm wind up getting into it a bit, with the latter taking the speedster for a ride into the sky, nearly dropping him to a certain death. But when Caitlin shows up, Firestorm flees. 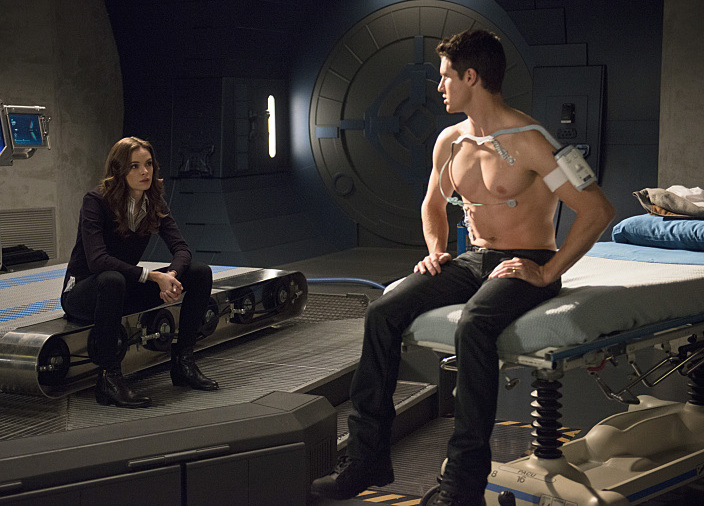 Later, after the S.T.A.R. Labs team reunites “Stein” with his wife Clarissa, they dial down his volatility with a prescription drug cocktail and then get the idea to separate Stein and Ronnie using fission.

While running tests on Stein, Caitlin asks if she can talk to Ronnie, but that’s not possible — though Stein is able to recall one vivid memory, of the place where Ronnie proposed: “He loved you very much.” Wells  meanwhile observes that the Stein and Ronnie atoms are trying to separate themselves at an exponential rate that could result in a nuclear explosion. The debate: Is ending two lives worth saving millions? Stein makes that call himself, disappearing to the Badlands to take his own life, but Barry arrives there with Caitlin to instead try a quantum splicer that Wells jerry-rigged using the tachyon device. Seeing Caitlin, Stein gives her a warm kiss,”from Ronnie,” but he ultimately explodes, as Barry races Caitlin away from the mushroom cloud. Elsewhere, General Elling gets word of the event, telling a soldier, “Bring me Firestorm.”

A BLAST FROM FUTURE BARRY’S PAST | Joe recruits Cisco and his gadgets to revisit the scene of Nora Allen’s murder, in a desperate bid to dig up new clues. 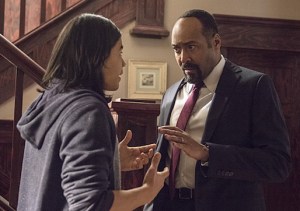 (Fortunately, the old Allen home is now occupied by a flirty divorcee not spooked much by the whole homicide thing.) When Cisco realizes that an old mirror of the Allens’ is still in the living room, and that is has a silver nitrate backing, he gets the idea to pull “photographs” from it. Better yet, he turns the images into a 3D holographic display. That fancy-ass slideshow leads Joe to a splatter of blood covered by wallpaper. He asks Cisco to test the sample — against Dr. Wells’ DNA, an accusation that leaves Cisco gobsmacked if not also a bit crestfallen. The geek boy begs off the case, but later reports to Joe that the sample actually belongs to Barry. Specifically, an adult Barry Allen!

What did you think of this week’s episode, “Nuclear Man”? And Robbie Amell’s impression of spy daddy Victor Garber?