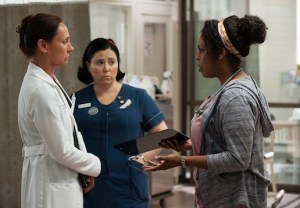 Dr. Jenna James will have a chance to get herself out of her self-imposed Medicare fraud scandal at Mount Palms Memorial Hospital — but she’ll have to act quickly.

HBO has renewed its dark comedy Getting On for a third and final season, TVLine has confirmed.

Based on the British series of the same name, Getting On — which stars Laurie Metcalf as the manic head of the hospital’s extended care unit, and Niecy Nash and Alex Borstein as her harried nurses — ended Season 2 with the women facing possible racketeering and anti-kickback proceedings in California Superior Court.

RELATED Game of Thrones Season 5: 7 Exciting Bits from A Day in the Life

Production on the six-episode third season will begin later this year.

Your thoughts on HBO’s latest announcement? Drop ’em in the comments section below.