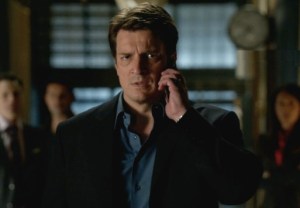 This week on ABC’s Castle, Rick and Kate got at least one (and possibly two) blasts from the past, when the murder of a pretty blonde led them first to Dr. Kelly Nieman, and then to a guy who looked a lot like Jerry Tyson aka serial killer 3XK.

All told, this long-awaited opener to the sweeps two-parter was pretty damn tight, not a moment wasted, every scene counted. Guest stars Annie Wersching and Michael Mosley, on screen together for the first time, made for a chilling one-two punch, even when holding frickin’ hands as they waltzed out of the 12th. It all built to a final sequence that, yes, you probably saw coming, but nonetheless was alternately gripping and haunting. That said, it did rely heavily on one narrative cheat, as denoted by my “GMAB” below.

Setting things in motion was the murder of Susan Watts, a young blonde whose corpse struck a nerve with Lanie. Turns out, the vic had gone under the knife, via a technique akin to that performed by Dr. Kelly Nieman on last season’s Lanie/Esposito lookalikes. Indeed, in digging up info on the deceased, Beckett finds a strongly suggested link to Dr. Nieman. Alas, there’s simply not enough evidence to establish a connection — even when Amy Barrett, a blonde bearing a striking resemblance to Susan, 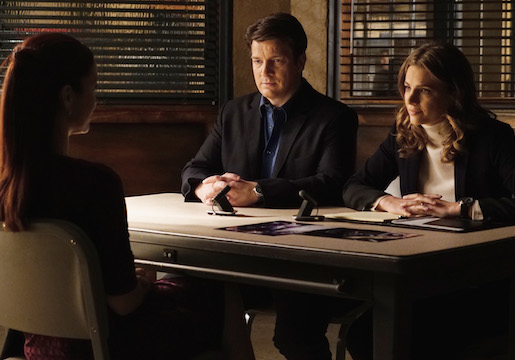 is spied leaving Nieman’s practice… and then getting into a truck with (seemingly) Jerry Tyson.

After a bit of good ol’ “canvassing,” RySpo track down the truck’s owner, one “Michael Boudreau,” and bring him into the station for questioning by Rick and Kate. The POI claims to have never met either of his interrogators, and then insists he is in fact Michael Boudreau, and that he had a bit of “work done” that left him looking like Jerry Tyson — for better or for worse.

Getting everyone’s goat is the fact that because Fake Lanie last season accessed and removed all of the 3XK files/evidence from the precinct, they have no Tyson DNA to compare to Boudreau’s. So Rick and Kate hightail it 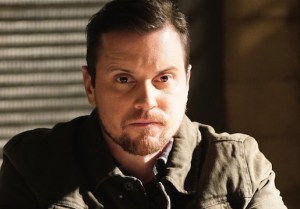 to see Tyson’s mother in White Plains, though there they learn that 1) she wasn’t his biological mother and 2) Jerry years ago stopped by to collect all of his things. Mom however held onto a few keepsakes — including a matchbox with one of Jerry’s baby teeth.

Back in the interrogation room — while Kate races off (alone, GMAB) to meet with a newly anxious Amy Barrett, and as Gates waits for the DNA results — Rick confronts Boudreau/Tyson about his mommy issues, how he must have realized that killing women who looked like his young mom was more sadistically sating than snuffing the old broad herself. And then he got the idea to have Dr. Nieman cut patients to meet his precise needs. “You raise them, like livestock,” Rick remarks. “It’s you.” The man responds, “Yes, it is” — pause, pause, pause, pause — “if by ‘you,’ you mean Michael Boudreau.” And moments later, Gates confirms the worst, entering to set Mr. Boudreau free, since the tooth was no match.

Just as Boudreau walks to the elevator with Dr. Nieman, adorably/creepily holding hands, Rick realizes that the name of the man who found Susan Watts — “ED TURNER” —  is an anagram for RETURNED. And that Boudreau and Nieman meant to both be at the 12th at that moment for a reason — “Beckett!” We then see Kate on a dark sidewalk get a call, but it’s not Rick, it’s the song, “We’ll Meet Again,” followed by a syringe to her shoulder. Kate slumps into a wheelchair and gets carted away by…? 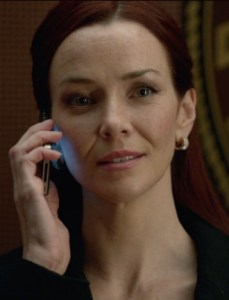 While Rick is unable to reach Kate, Nieman takes a call from a disguised voice that says, “It’s done” — just as the elevator doors close, but not before Boudreau/Tyson shoots a wink at Rick.

Elsewhere in the episode: A casual chat about Alexis (who now gives Kate goodbye kisses in the morning) reveals that Kate to some degree has baby on the brain, while Martha thanking Rick for urging her to pursue the theater role she got was a nice nod to the alt-reality episode.

What did you think of the episode “Resurrection”? Is Boudreau in fact Tyson, and a fake baby tooth was left behind when he picked up his stuff from Ma? Or did Nieman cut Boudreau to look like Tyson, for the purpose of a grand gaslighting scheme?