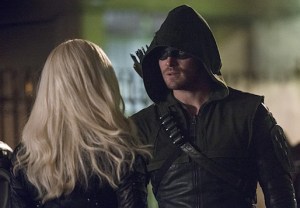 Oliver Queen has returned to a new Team Arrow.

Having being “dead” for a month, Oliver resurfaced to help knock down Danny “Brick” Brickwell and save the Glades. Afterward, he found a moment to survey the new landscape (Laurel has gone full Canary!) and then he clashed with his No. 1 gal Felicity, who declared that she doesn’t want to be loved by a man who would ally with the likes of Malcolm Merlyn.

With Season 3 of the CW hit continuing this Wednesday at 8/7c, TVLine invited showrunner Marc Guggenheim to tease the assorted changes — and at least one huge twist — ahead.

TVLINE | I feel like we’re entering the “third act” of the season, following Sara’s murder and that investigation, and then Oliver “dying” at Ra’s al Ghul’s hand, to protect Thea.
The season is more demarcated in fourths, as opposed to the traditional three-act structure. Certainly Episodes 10, 11 and 12 were their own”mini-act,” with Team Arrow moving on in the wake of Oliver’s apparent death. Episode 13 kicks off the next piece of our story, and things get a really crazy from here on out. Episodes 13, 14 and 15 are probably the next “book” or movement in the story, 15 ends with a game-changing twist, and from 16 to 23 it’s just one crazy run up to the finish line. [Laughs] I’m really excited about where we’re going mainly because, as I tweeted out, when all is said and done with Season 3, stabbing Oliver through the chest and kicking him off a cliff will end up being the least crazy thing we do all year. I encourage people to watch the whole season and then confirm whether or not I’m telling the truth.

TVLINE | Is Oliver able to just jump back into things? The team has come into its own while he was away. Does that almost become a sticking point?
It’s very much a sticking point. One big piece of Episode 13 is Laurel and all the things that she’s been struggling with — Sara’s death, lying to Quentin, Oliver’s disapproval of her being Black Canary. Meanwhile, you’ve got Oliver who has returned to Starling City and Team Arrow to discover that they have really moved on without him. 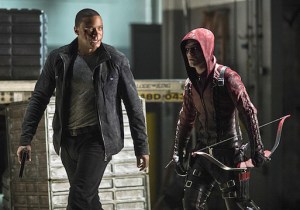 So, things are not going to be as simple as, “OK, guys I’m back! Everyone start listening to me again.” He’s going to struggle with a brand-new team dynamic, one that is a lot more democratic than he is used to.

TVLINE | Is he going to take over Laurel’s training?
No, he’s not there yet. He begins Episode 13 very much not approving, at all, of what Laurel’s doing, so it’s a long way to go from that to training her, which obviously implies a degree of validation.

TVLINE | Besides, he’s on his own path now, as far as training to kill Ra’s.
Exactly. He’s got bigger fish to fry.

TVLINE | Now, even though that is his goal, I can’t imagine that the TV show Arrow can kill the Ra’s al Ghul character. I suspect larger forces at DC Comics wouldn’t want that to happen.
The truth of the matter is that DC is our partner, and they’ve been a wonderful partner. They’ve never told us who has to die or who has to live — and I don’t anticipate that changing any time soon. What we do with Ra’s as far as whether or not he lives or dies will be based solely on a creative decision that we make for the good of the show, and has nothing to do with the greater forces at DC.

TVLINE | Plus, with someone like Ra’s, “dies” probably always comes with quotation marks.
Certainly given the Lazarus Pit and what’s happened in the comic books and what not….

TVLINE | That scene was an unanticipated gut punch, I tell you.
Thank you — it was definitely designed to be. We very much want to explore what it looks like with Felicity still working with Oliver but post the events of Episodes 10, 11 and 12, where she has not only moved on romantically, 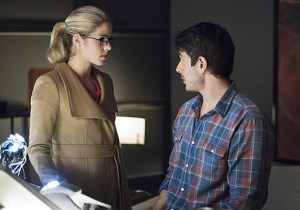 but, along with Diggle and Roy, has developed a bit more ownership and more agency in the “lair,” as it were. It’s going to be interesting to see what happens if Oliver decides to call the shots and expects everyone to just fall in line the way they used to.

TVLINE | I was reading the synopsis for Episode 14, “The Returned,” and it sounds like a fun nod to longtime fans, as Flashback Oliver sneaks back into Starling City and discreetly checks in on everyone.
Episode 14 is a bit of a “love letter” to the show. It stands on its own feet, for people who are new to the show, but if you’ve been watching since Season 1, it’s got a ton of Easter eggs and little inside jokes. There’s a lot of really fun moments that are the kind of things you can only do if you’ve done over 50 episodes — you get to go back and explore your roots a little bit, so you’ll want to watch this episode carefully. My hope is that if people watch the show now but haven’t seen Season 1, they’ll want to go back and Netflix it afterwards.

TVLINE | Stephen Amell was telling me that Episode 15, “Nanda Parbat,” is especially stunt- and action-heavy, one of his favorites of the season.
It certainly is one of mine. It’s one of those episodes where everything came together very nicely — its got some wonderful character moments, some incredible action, and it’s got a final twist that I think people will be talking about for a long time. Certainly a twist that sets the table for the remainder of the season.