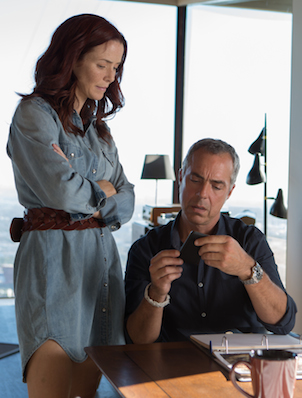 Agent Renee Walker had a couple of very busy days on 24, sure, but Annie Wersching puts the ill-fated fed’s workload to shame.

Once crowned TVLine’s Most Ubiquitous Guest Star, Wersching this month alone has three buzzy gigs on tap: starring opposite Titus Welliver in Amazon’s adaptation of Michael Connelly’s Harry Bosch crime novels (10 episodes release Friday, Feb. 13); ABC’s Castle, where on Monday she kicks off a two-part encore as the wicked Dr. Kelly Nieman; and The CW’s Vampire Diaries, on which she soon will be recurring as… well, that answer is a sticky wicket.

THE ROOKIE | On Bosch, Wersching plays Julia Brasher, an LAPD cop who was introduced in Connelly’s City of Bones novel. She first meets the titular detective when they each get wind of a child’s bones found buried in the Hollywood hills. (Jamie Hector, Amy Aquino, Lance Reddick, Eric Overmeyer and Scott Wilson round out the cast.) Brasher only has rookie status, due to her circuitous path to the LAPD, having first become a lawyer and toiled at her father’s law firm. Even so, this “boot” is determined to kick some crimesolving butt.

“She’s new to the force, but she doesn’t carry herself necessarily like a rookie, because she’s had a lot of life experiences,” Wersching explains. “Shes a bit of an adrenaline junkie, someone who gets bored pretty easily.” As such, Brasher boasts a bit of pluck that catches Harry’s eye, professionally and personally. And the feeling is mutual.

“She knows his reputation, then on top of it there is a spark,” Wersching notes. “It’s like her dream sort of relationship, because not only is there a genuine connection, but she wants to be the kind of detective he is. She wants to put a bit of a ‘middle finger’ up to the rules and do what you have to for justice — not unlike Jack Bauer.”

OK, slow down there. Wersching allows with a smile that Brasher is “slightly less rebellious” than 24‘s bull-headed day-saver, nor does the rookie cop dabble in derring-do “quite in the same way as Renee Walker.” That said, “Julia is at a place where she’s ready to try to do that type of stuff, though it gets the best of her a bit.”

Asked how Bosch is able to differentiate itself from other crime dramas, Wersching says that while other shows may announce, “This is a great character because he is flawed,” Welliver and the Amazon series have 19 novels to draw on, “all this documentation of his flaws and trials and tribulations. And because of that, Titus is able to flesh him out so much more.”

Also, Bosch — because of its non-broadcast home — can be a bit grittier, more bold, as Wersching learned upon committing her first display of dorsal nudity to film. “Holy hell…,” she remarks with a laugh as she reflects on braving that frontier. “That’s one of the things in [City of Bones], how after they first ‘make love,’ Brasher’s just walking around completely naked in front of him, because she could not be more comfortable in her own skin…. I wanted to be true to the books.”

CASTLE‘S DOCTOR IS (BACK) IN | At the time she booked her Castle debut (for the November 2013 episode “Disciple”), 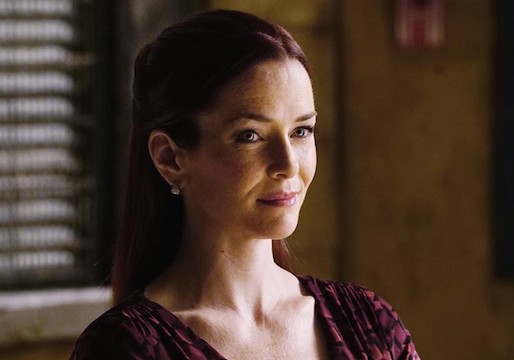 Wersching knew that Dr. Kelly Nieman would get an encore. She just thought it would be sooner, and not the fulcrum of a buzzy February two-parter. Teasing the circumstances of the premiere plastic surgeon’s return, “There is this strange coincidence that Beckett and the gang stumble upon someone else that has Dr. Nieman as their surgeon — but of course in the world of Dr. Nieman and 3XK, nothing is a coincidence,” the actress shares. “No, with them every single thing is planned out, and they have some specific, painstaking plans for Beckett and Castle in particular.” But is 3XK truly back from the (presumed) dead? A TVLine sneak peek has returning guest star Michael Mosley playing a “person of interest” who sure looks like the nefarious Jerry Tyson, yet insists he isn’t that guy. Has the cunning surgeon possibly carved out a doppelganger to gaslight her boyfriend’s adversaries? “There is definitely an element of that going on,” Wersching affirms, “where Castle thinks one thing and he’s trying to get everyone else to believe him.” Without revealing much more, 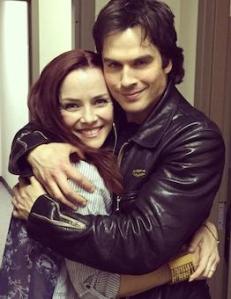 Wersching only adds that Part 1 ends with a cliffhanger she repeatedly describes as “awesome.”

VAMPIRE DIARY | Of her upcoming arc on Vampire Diaries (launching Feb. 19), meanwhile, Wersching “can’t say too much,” beyond her character’s name, Lily. Even the seemingly benign question, “Is she good, bad or in between?” is met with a tantalizing “all of the above.” Wersching is aware there has been “a lot of speculation” about how Lily might fit into the larger mythos, but for right now all she can confirm is, “She absolutely has an agenda” in present day Mystic Falls.

Which of Annie Wersching’s upcoming roles will you tune in for?