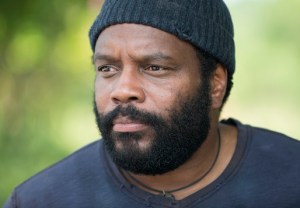 After AMC’s The Walking Dead killed off Beth in its winter finale, you might have thought, “Whew! At least now the rest of the survivors are sure make it to the end of season!”

But if you did, you thought wrong.

In Sunday’s midseason premiere, one of Noah’s zombified brothers put the bite on Chad L. Coleman’s Tyreese, and rather than try to hang on post-amputation, the gentle giant decided that he was through paying “the high cost of living.”

Here, the actor defends what fans have often perceived as his character’s weakness, puts forth not one but two perfectly plausible explanations for why Karen wasn’t among her boyfriend’s hallucinations and clears up “the biggest lie on IMDb.”

TVLINE | Before we get down to the nitty-gritty, can I just say I am pissed that the show killed Tyreese. I really liked having a character in there that was truly just a good, decent, solid guy. But maybe that was his downfall — he was just too good for that world?
I don’t think so. It was just a cruel irony. No matter how virtuous you are, no one is immune [to the perils of that world]. Hopefully, what Tyreese stood for will carry on even after his death.

TVLINE | Did you know before Beth’s demise that Tyreese was next?
I found out about Beth at the same time I found out about myself. I knew three episodes prior that that was what was going to go down. I saw it coming at one point [when Tyreese lied about killing Martin], but I was told that the cost of him lying wasn’t going to be anything that grave.

TVLINE | Surprise!
I knew they had compromised the character. [Once you lie,] you’re inviting something on yourself. Bush and Cheney said, “Let’s go over there and say there’s weapons of mass destruction so we can do what we need to do.” There’s a cost for doing things like that. That’s why it was a little trippy for me [not because Tyreese spared Martin’s life]. You should always wrestle with whether to kill or not. You should be uncomfortable. I really don’t care if somebody thinks it’s soft. If you’re not in touch with your vulnerability, you’re not going to be an effective leader. You need a balance [and] to be in touch with your feminine side.

TVLINE | I love that you seem to have loved Tyreese as much as I did.
I think I represented the most super human being and a person — not a comic book cut-out, a real person. [But that said,] his level of consciousness and sensitivity was an Achilles’ heel. If you didn’t kill somebody and that person comes back to stalk everybody and — had it gone a different way — kills some folks, I’d have played a hand in that. So it’s tough to not say that that Achilles’ heel didn’t come back to bite Tyreese.

TVLINE | Martin suggested that it was literally why Tyreese died.
The reason why I’m not alive is everyone circles around Rick. My ideology and philosophy doesn’t fit. So I wouldn’t stay, anyway. I would have to tell my sister, if you feel like this is the way to do things, then I’m just going to go off on my own and find some like-minded people. But they weren’t going to go that route, because the show is focused on Rick. [Aside from that,] the creation of Daryl, more than anything else, is probably the reason why I’m not on the show. I was [Rick’s] right-hand man [in the comics].

TVLINE | Did it seem odd to you that so many significant people from Tyreese’s past appeared to him in visions before he died, but not his girlfriend, Karen?
[Melissa Ponzio] probably wasn’t available or said, “You’ve got to pay me this amount of money, or I’m not going to do it!” [Laughs] You know what, I think we had already exhausted the Karen thing. These are the people who were fresh in his mind. Like with Bob, I had to put that man down!

TVLINE | Was it hard to not get a goodbye scene with Sonequa Martin-Green (Sasha)?
Absolutely, but the fact that she doesn’t get to say goodbye to me is going to have a profound effect on her. She’s still in the land of the living, so it’s far more interesting to watch her have to navigate the world knowing that her brother got taken out and she didn’t get to say goodbye. Tyreese would have done everything in his power to make her feel OK with it, because he was doing the same thing with Bob’s death. Now, you’re going to throw this on top of it [without the benefit of his counsel]? That’s more fuel for the fire.

TVLINE | Would Tyreese have loved that his friends stuck his trademark cap on his grave marker, or would he have been pissed that they didn’t bury him in it?
That’s a conversation we had, actually. But I’m dead, so I don’t know. I’m pretty sure that Sasha now owns that. Or I hope so. I know if that was my sister, and that was something that was near and dear to her, I’d want her to have it.

TVLINE | What will you take away as your favorite memory of your Walking Dead experience?
“The Grove.” I say that now, but I’m pretty sure that after [my swan song], it will be both that episode and this one.

TVLINE | What’s next for you? I read that you were doing a movie called Shoedog with Joe Manganiello…
That is the biggest lie on IMDb! [Laughs] I’d love to do it, but I’ve heard nothing about this movie from anyone since I think about ’07, ’08! It’s never moved forward. What I am doing is [Syfy’s] The Expanse; we’re finally going to get our Star Trek of this era. I’m also producing my first movie, When January Feels Like Summer. When I saw the play, I said, “This has to be a movie.” You never see Indians and African-Americans engaging each other in just a normal, human way. And I’d never seen a transgender Indian guy in a movie in Harlem. It’s like The Crying Game meets Slumdog Millionaire, but it’s a better movie than Slumdog Millionaire. Then, on August 7th, 8th and 9th, I’m working on a project for Ferguson called Laughter Is the Best Medicine. On Friday night, we’re going to give the community a free concert with A-list comedians. The second day, we’re going to have what’s called a reconciliation workshop… for anybody who wants to participate and move toward peaceable change. And then the third day will be a block party.

TVLINE | That all has to take away a little of the sting of being killed off.
You know, I didn’t really feel a sting. I felt like I would have argued to stay on the show if I could come up with something that could stay in their narrative path and yet keep the character in the mix. But I feel like I’ve done everything I could do on the show.