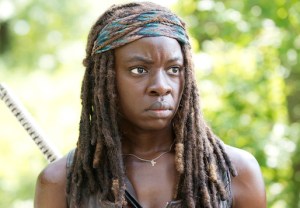 When at first it appeared that the midseason premiere of The Walking Dead was going to be full of philosophical navel-gazing, you were probably annoyed. (I was.) But I’m willing to bet that, when you realized what was actually going down, you were as sorry as sorry could be that the hour wasn’t just going to be a whole mess of introspection. (I was.) Here’s why…

GRAVE MATTERS | In the trippy, disorienting opening of “What Happened and What’s Going On,” we flashed from a funeral (Beth’s being the logical but incorrect assumption) to blood dripping on a framed picture of a quaint home and from Rick and Co. deciding to follow through on Beth’s plan to deliver Noah to his family’s place in Richmond, Va., to Mika, sister Lizzie by her side, sweetly saying, “It’s better now.” But to whom was she saying it, WTF did it mean and were the girls ghosts? Visions? What? We wouldn’t find out until later. (And when we did, we wouldn’t be happy.)

ROAD TRIP | En route to Richmond in a station wagon with Rick, Glenn and Michonne, Noah tried to assuage any guilt Tyreese might feel over Beth’s death by assuring him that he’d made the right call in suggesting a trade with Dawn. Noah also revealed that he had a mother and twin brothers waiting for him — “I hope,” he added. In turn, Tyreese opened up about the way his father had made him listen to the news on the radio, no matter how upsetting the stories. Facing those ugly truths was just “paying the high cost of living,” he recalled his dad saying. Then, about two miles from the group’s destination, they pulled over, parked amid some wrecked vehicles and started walking the rest of the way through the woods. “Just in case,” Rick said.

HOME, BITTERSWEET HOME | Sadly, Shirewilt Estates was no longer the safe base full of loved ones that Noah remembered. There was a gap in one of the gated community’s perimeter walls, and inside, it was nothing but walkers and bodies. While Tyreese comforted a tearful Noah, Michonne let her hopeful façade drop, and Rick debated with an increasingly cynical Glenn whether it mattered that (or even why) Dawn had been killed. Perhaps sensing that they were all becoming feral after so much time on the run, Michonne desperately argued that they needed to find someplace to stop. “You can be out here too long,” she noted.

THIS BITES! | No sooner did it appear that Tyreese had convinced Noah that “this isn’t the end” for him than the grieving youngster had run off to his old house. There, he apologized to the body of his mother (a chunk of her rotting head missing) for arriving too late to save her, and Tyreese, rather than put down one of the boy’s brothers in front of him, bypassed a bedroom that clearly had a walker in it. In the next bedroom, the gentle giant became so transfixed by a photo of the twins that he didn’t notice one of them — zombified, of course — sneaking up behind him until its teeth were in his arm! (Insert your expletive of choice here.)

VISION QUEST | After Noah beaned his little brother (with a handy toy plane that had been embedded in the ceiling) and ran for help, Tyreese began seeing visions. First up: Martin, the Termian whose worthless life the big guy had spared. As much an asshat as ever, Martin tried to lay the blame on Tyreese for everything from Bob’s demise to Beth’s. Luckily, it wasn’t long before Tyreese saw a vision of Bob, who immediately called bulls— and assured his pal that “it went the way it was always going to go.” As a nearby radio broadcast reports of the horrors Tyreese had witnessed since the apocalypse, the Governor turned up like a bad penny to add his two cents, and Lizzie and Mika promised that “it’s better now” (presumably now that they’d crossed over). Along the way — as if he didn’t have enough to contend with! — Tyreese was forced to stick his wounded arm in yet another walker’s mouth so as to dispatch the monster (in such a way that its blood then dribbled artfully on the picture from the episode’s prologue).

SWAN SONG | Meanwhile, Michonne seemed to be beginning to lose it. She was even keen to patch the hole in the perimeter wall and stay put until she noticed the nearby woods full of walkers’ lower torsos. (We later learned that the upper torsos, still wriggling, were stashed in a truck near the gang’s parking space.) Finally, she suggested that all the survivors head for Washington. Though Eugene was a big, fat liar, he had done the math, she pointed out, and concluded that the city offered them their best odds of survival. “Don’t you want one more day with a chance?” she pleaded with Rick. And since he did want another day with a chance, it was agreed. Washington would be their next — hopefully last — stop. Just then, they and Glenn heard Noah hollering, rescued him from a walker attack and made tracks to try and save Tyreese, who by this point was being serenaded by Beth.

PARTING WORDS | After the Governor mocked Tyreese for forgiving Carol for killing Karen — try explaining those 11 words to a non-fan! — the injured party stood up to the bully and declared, “It’s not over.” Alas, it was almost over. As Tyreese imagined Lizzie taking his hand, Rick was actually holding his arm steady so that Michonne could hack it off at the gnawed-on part. And even that didn’t help. As Rick, Glenn, Noah and Michonne drove Tyreese back to rendezvous with the others, he pictured himself in the station wagon with his ill-fated friends, and asked that the radio and its awful newscast be turned off. He was done paying the high cost of living. So it turned out that — dammit! — the funeral in the show opener was actually his. (Personally, I think he’d have wanted to be buried in the knit cap he always wore. But it was kinda nice the way they perched it on his makeshift grave marker, too.)

What did you think of the episode? Were you moved by Tyreese’s death, or after so recently losing Bob and Beth, are you becoming numb to the losses? And wasn’t it weird that Tyreese didn’t have a vision of his girlfriend, Karen?