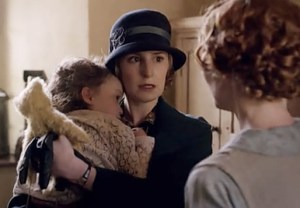 Just when you thought Edith Crawley’s luck couldn’t get any worse… enter the Nazis.

Downton Abbey‘s very own Meg Griffin on Sunday learned that, as previously suspected, Michael Gregson had been killed by members of Hitler’s growing regime, leaving poor little Marigold fatherless after all. So she did what any woman who just inherited a publishing company from her deceased baby daddy would do: She hauled ass to the nearby farm, revealed to the kindly woman that the child she’d been caring for is actually hers, then snatched the little bugger from her arms and disappeared without a trace. Frankly, I’ve never found this show more relatable.

Then again, can you really blame Edith for leaving Downton, especially after that unfortunate — albeit super hilarious — exchange with Mary earlier in the hour? In case you need a refresher, here’s a play-by-play of the snark-fest, immediately following the reveal of Mary’s new haircut:

Mary: I suppose you disapprove?
Edith: Not especially. I’m just amazed that even you would choose the day after I learn the man I love is dead to try out a new fashion.
Cora: I don’t believe that’s quite fair.
Edith: And if that weren’t enough, you’ve planned a jolly picnic for Saturday. Am I really expected to join in?
Mary: Hopefully not, as you usually spoil everything.

I do believe Mary wins this round, as always. 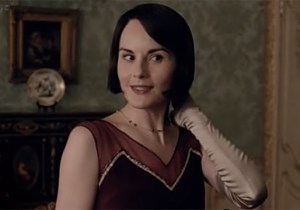 A CUT ABOVE | Of course, Mary’s new ‘do — which makes her look like “a man,” according to Downton’s own Anna Wintour, the Dowager Countess — was far from the only gasp-worthy development in her life this week. She also participated in a horse race alongside (so to speak) Charles Blake, Tony Gillingham and Maybe-She’s-Born-With-It-Maybe-It’s Mabel Lane Fox. For reasons I have yet to decipher, Charles continued his efforts to reunite Tony with his ex, which appear to be working. (Seriously, is he hoping to snag Mary for himself by pairing Tony with Mabel? Because the impending arrival of The Good Wife‘s Matthew Goode seems to suggest that plan won’t work.) Either way, both of Mary’s former suitors have agreed to stay at Downton for the night, which means at least one of them will be dead by morning; call it the Pamuk factor.

AN ‘INNOCENT’ MAN | Here in the United States, we have an “innocent until proven guilty” policy, but that doesn’t always apply at Downton — especially when it comes to John “Couldn’t Look Like More of a Serial Killer” Bates. So imagine my surprise when Bates revealed that, despite wanting to kill Mr. Green, he couldn’t bring himself to follow through with the plan. As he explained to Anna, he never got on the train, which means the unripped ticket in his jacket pocket would prove his innocence. Unfortunately, Mrs. Hughes — who’s now sitting pretty atop Bates’ to-kill list — threw out the ticket, forcing him to find another way to exonerate himself. 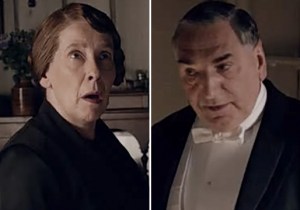 PROPERTY VIRGINS | Speaking of Mrs. Hughes, the One True Queen of Downton received quite a proposition from the oh-so-suave Mr. Carson this week: He wants to invest in property with her! He claimed it would merely be a “business venture,” but Mrs. Hughes — along with all of us dedicated #Hughson ‘shippers — saw right through his charade. And judging by her flustered response, I’d say she didn’t mind one bit. “Go ahead and ring that gong,” indeed! Ow-ow!

‘REALITY’ CHECK | Meanwhile, Thomas’ troubling tale took a somewhat hopeful turn this week, as Baxter accompanied him to an appointment with Dr. Clarkson. After admitting, as we suspected, that he had been receiving electroshock therapy in the hopes of becoming “more like other people,” Thomas was told that his so-called “condition” is unchangeable. “Harsh reality is always better than false hope,” said the good doctor, who — unless I totally misread his intentions — was far more open and considerate than, say, Carson. Poor Thomas; someone send that guy a time machine already!

* Cora finally convinced Robert to stop being a pouty jerk by telling him that, if he never once gave a woman the wrong impression, he could continue sleeping in his dressing room. (And we all know he did.)

* It looks like Isobel has decided to accept Lord Merton’s proposal, telling the D.C. she sees marriage as a “last chance for a new adventure before I’m done.” (Most. Depressing. Wedding. Vow. Ever.)

* The D.C.’s old flame Prince Kuragin told her he still loves her, and that he wants to run away with her. I don’t expect him to stick around much longer, but I’d like at least one good sex scene before he departs. Too much to ask?

All right, fellow Downton fans, it’s time to weigh in: Do you blame Edith for flying the coop? Which of Mary’s former suitors are you rooting for? And, seriously, when are Carson and Mrs. Hughes going to make it happen?! Drop a comment with your thoughts and theories below.