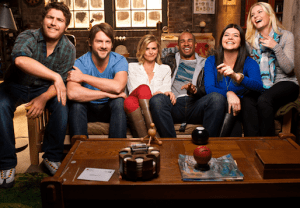 Almost two years after the beloved ABC comedy Happy Endings was cancelled, the Twitter handle @happywrites — which was run by the show’s scribes — published a rather intriguing tweet on Friday.

The link in the tweet brings readers to a white screen that states, “It’s almost a new day,” with a countdown clock currently showing 52 days, 11 hours and some-odd minutes.

The only question is: What could the tweet be trying to tell us?

Though the message has prompted many user replies hoping for a revival of the show, that seems unlikely, given some of the cast member’s current gigs: Elisha Cuthbert is set to star in NBC’s One Big Happy, Zachary Knighton is keeping busy with Fox’s upcoming Weird Loners and Casey Wilson currently appears in the Peacock comedy Marry Me (though its future is up in the air).

That said, of the show’s remaining key players, Adam Pally just left The Mindy Project, Eliza Coupe’s Benched was cancelled last month and Damon Wayans Jr. announced he’ll exit New Girl at the end of Season 4 (though he is being courted heavily during pilot season).

Do you have any theories on what the mystery tweet means? Drop ’em in the comments section below.