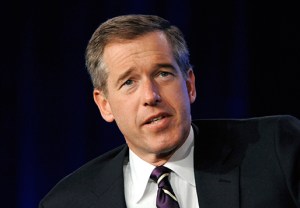 In the wake of the recent controversy regarding his coverage of the Iraq War, Brian Williams announced Saturday that he will temporarily leave the anchor desk at NBC Nightly News.

According to various reports, including our sister site Deadline‘s, the Nightly News managing editor released the following memo to his staff:

In the midst of a career spent covering and consuming news, it has become painfully apparent to me that I am presently too much a part of the news, due to my actions.

As Managing Editor of NBC Nightly News, I have decided to take myself off of my daily broadcast for the next several days, and Lester Holt has kindly agreed to sit in for me to allow us to adequately deal with this issue. Upon my return, I will continue my career-long effort to be worthy of the trust of those who place their trust in us.

UPDATE: Williams also has scrapped a planned Feb. 12 visit to The Late Show With David Letterman.

The controversy surrounding Williams began during a Jan. 30 broadcast of Nightly News, when he falsely claimed his helicopter was hit by a grenade in March 2003 as he covered the Iraq War.

Williams apologized for his claims on the air last Wednesday. Since then, the network has begun an internal investigation into his coverage of the war and other major events, including Hurricane Katrina.

NBC News President Deborah Turness released a memo on Friday, stating, “We have a team dedicated to gathering the facts to help us make sense of all that has transpired.”