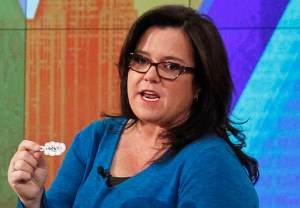 Rosie O’Donnell is again parting ways with The View, with the coming week being her last.

Explaining the abrupt exit, the talk host’s publicist said in a statement, “Rosie and her wife Michelle [Rounds] split in November. Rosie has teens and an infant at home that need her attention…. She is putting her personal health and family first.”

O’Donnell’s decision comes just weeks after an unsubstantiated report made rounds that Rosie Perez was vacating the daytime talker’s dais.

ABC News, under whose domain The View currently resides, issued its own statement on the split, touting O’Donnell as “an immensely talented star who comes in each and every morning brimming with ideas, excitement and passion.

“When [Rosie] told us that she wanted to exit The View, we respected and understood her desire to put her well-being and her family first,” ABC News’ statement continued. “We’re delighted she’s still part of the ABC family with upcoming guest appearances on [ABC Family’s] The Fosters. And we know she’ll return to The View often with her unique point of view and updates on her work and her family.”

O’Donnell first cohosted The View during its 2006-07 cycle. In 2011, she launched The Rosie Show on Oprah Winfrey’s OWN network, but that lasted less than a year. She rejoined The View for Season 18, which premiered in September 2014.

Will you miss Rosie’s View on things?