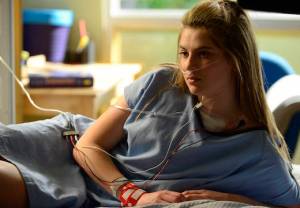 Have a box of Kleenex handy for Red Band Society‘s two-hour series finale on Saturday (8/7c on Fox), warns executive producer Rina Mimoun — but not just to mop up tears of heartbreak.

“By the time we were writing Episode 13, while we didn’t know 100 percent that it was the series finale, Fox had indicated it was at least going to be the season finale,” she explains. “So we didn’t want to leave it on a downbeat. People come in, and people go out, but there’s always hope.”

True, last Saturday’s episode ended with Hunter dying, Leo’s cancer coming back, and Emma in a free-fall, but as Mimoun sees it, the show’s writers wanted to “leave everyone seeing this show is about the circle and cycle of life.”

TVLine caught up with Mimoun to dish the finale’s mystical twist on Kara and Hunter’s romance, Emma’s very real confrontation with her mother and a last-minute romance for Dash.

TVLINE | Can you preview the Kara/Hunter resolution? Especially because one might not suspect Hunter to return, seeing how he’d passed away last week.
All the other shows I’ve worked on, like Everwood for example, we were very grounded in reality, and we didn’t have the magical realism piece to the show. Red Band, however, always had “Charlie World.” So we thought we could push the envelope and tell a story that’s a little bit mystical and spiritual and from beyond — we were really kind of trying to live in Amélie, in this hyper-fantastical way. We thought, “well, thank God that Charlie World existed because, otherwise, it would be too weird.” But we think we pulled it off. I don’t know, though, you guys will tell me [after you see Episode 12]. 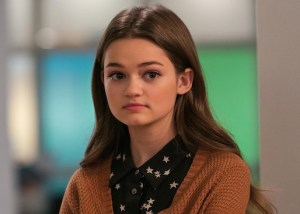 TVLINE | As you approached these final two episodes, were there any arcs that you definitely, definitively wanted to conclude?
The story that I personally was the most invested in emotionally was Emma’s. For whatever reason, be it the way Ciara Bravo continuously knocked it out of the park or just the fact that it’s a topic that’s close to my heart — I know so many people who struggled with that disease — I felt that was the one that I needed to take further. And once we got to that emotional breakthrough with her mom in Episode 10, we knew that we needed to bring mom back. I didn’t what to leave feeling like Emma didn’t have a psychological breakthrough. It was very important for us to tell.

TVLINE | The final two episodes also kick off a new romance for Dash.
That was the only bummer,. There was a moment in time where we felt we were doing more than 13 episodes, and we were excited because we had the opportunity to introduce this new character, and I love the actress (Jessica Lu). She and Astro (who plays Dash) had so much fun together, and they just popped on screen. That is the one arc that got tragically cut a bit short; we would’ve liked to explore that relationship a lot more.

TVLINE | Dash in love is something we haven’t really seen all season, either.
It came from that iconic teenage love story idea,  that Twilight thing, when you love someone that you can’t be with. And we found out in doing research that two cystic fibrosis patients are not supposed to be together. So naturally we thought, oh my God, well that is ultimately the most epic, romantic thing. Again, if you re-watch the series, it actually made sense because Dash has always been the wise one, and has all these theories and comments on relationships. So when you finally meet this person Mae, you realize, “Oh, it’s because he has been having a relationship. He just hasn’t told anyone about it, and it’s all been online — which is really common in the cystic fibrosis community.” It felt like a great way to tell a different form of Twilight. No vampires necessary.

TVLINE | That’s a good thing.
Yes! [Laughs] I love when I don’t have to bring a vampire onto a show. I’m happier that way!