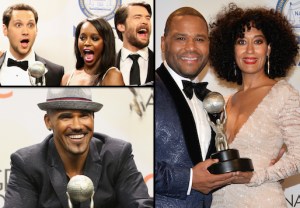 ABC’s black-ish was TV’s big winner Friday evening at the NAACP Image Awards — which celebrate the achievements and performances of people of color in the arts, as well as those who promote social justice through creative endeavors — by topping five comedy categories, including collecting acting kudos for leads Anthony Anderson and Tracee Ellis Ross.

On the drama side, Scandal and How to Get Away With Murder picked up a pair of wins each, while Lifetime’s The Trip to Bountiful TV-movie amassed four wins, including for actors Cicely Tyson and Blair Underwood.

Also of note, Taraji P. Henson (currently of Fox’s Empire) took home two prizes, for Actress in a Motion Picture (No Good Deed) and Entertainer of the Year.

The ceremony was hosted by Anderson and broadcast on TV One. Here are some of TV’s major winners; the full list will be posted at the Image Awards website.