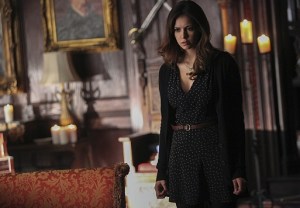 After a couple of Bonnie-less episodes, The Vampire Diaries checked back in with the witch this Thursday and found a sad sight in the prison world: Bonnie celebrating her birthday alone and miserable — and preparing to kill herself!

Following the merge, Kai inherits Luke’s conscience and now wants Elena and Damon to pass on an apology letter to Jo. Elena agrees with the caveat that Kai help them reach out to Bonnie. He can only get them over to the prison world as ghosts, but that’s enough for them to witness Bon Bon downing a bottle of bourbon in anticipation of making good on her suicide pact with Damon.

Kai’s magic runs out and they’re transported back to the Salvatore mansion, so only Jeremy gets to go on the second trip to help Bonnie find the map of Nova Scotia that Damon left behind. That’s where Silas’ headstone full of Qetsiyah’s magical blood and the key to getting out lies. Jer manages to touch the atlas and knock it on the ground before Liv stabs Kai, once again sending them home. She’s hellbent on killing Kai, but Jeremy is just as determined to stop Bonnie from killing herself.

One last trip to the netherworld finds a tearful Bonnie locking herself in the garage as the car exhaust fumes overwhelm her lungs. She starts to record one last video message for friends. “It’s the loneliness. I can’t take it,” she sobs. And for Jeremy: “I hope you’re living your life with no regrets. Stay strong.”

It’s those final words, the same ones her Grams said to her, that get Bonnie to stand back up. And through some magical power (and possibly as a result of all that weight-lifting), ghost Jeremy is able to open the garage door. So what was the worst birthday in any universe/timeline ends on a hopeful note, as Bonnie finds the atlas and hits the road. 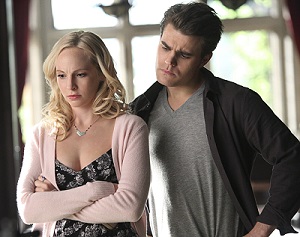 LUST IN THE WOODS | A mission to find Bonnie’s buried teddy bear in the present day leads to a whole lot of sexual tension between Caroline and Stefan. He taunts her so she will get angry and let out her emotions. When she finally does, she knocks him flat on his back, and he quickly brings her down with him. After some laughs, the tears start to well up, leading to an “Oh my God, just kiss already!” moment, but Stefan just brushes Caroline’s cheek as she breaks down.

TO THE FUTURE | Elena convinces Jeremy to apply to art school because Bonnie would want him to move on with his life. Hopefully, he did it via a fresh application and not that crumpled-up one!

BAD GIRLFRIEND | Tyler doesn’t take too kindly to being magically knocked out by Liv when he tries to stop her from going after Kai, thereby killing herself in the process. After the fight goes down, he convinces Elena to give Liv some of her blood. “And now that I see you’re OK, I never want to see you again,” he tells Liv. “I would have done anything for you. And you chose death over me.”

‘DELENA’ REIGNITED | After a pointed remark from Kai, Elena wonders if she and Damon would still be together if she was human. Damon doesn’t think so, because she was on her way to Stefan when she died, but Elena doesn’t agree. “I always somehow find my way back to you,” she says, suggesting they stop living in the past. With that, it’s back to sex wherever, whenever.

NO GAME | Enzo forces Matt to flirt with Sarah Salvatore. “Why do you even care?” Matt asks, saying what we’ve all been thinking. Enzo sees Stefan’s refusal to tell Damon the truth about Sarah as his way of using his brother’s guilt to keep him in check. Now, he’s going to insinuate himself into Sarah’s life and make her do awful things until she’s begging him to turn her into a vampire.

Vampire Diaries fans, what did you think of the episode? Did you shed some tears over Bonnie’s troubles? Does the Caroline/Stefan slowplay have you yelling at your TV?