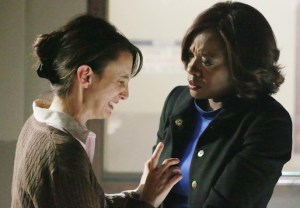 Go ahead and watch YouTube videos of baby animals getting belly rubs. Maybe make a nice roasted chicken with mashed taters and Brussels sprouts for your visiting sister-in-law. What’s that? You’re more into curling up on the couch and doing the Netflix thing with your adorable new boyfriend? Go forth and rent The Thorn Birds!

Trouble is, in the twisted, paranoid world of How to Get Away With Murder, these types of whimsical delights are a fleeting thing. They’re akin to a single paper towel trying to clean up a gallon of spilled milk (or spilled blood, as the case may be).

Something bad is always coming for Annalise Keating — be it a truly gnarly client (oh, this week’s was a doozy), a freaked-out co-conspirator (thank goodness there was no inappropriate touching of Wes this week), or the charred body parts of her presumed-to-be-on-the-lam hubby turning up at a local landfill. (“Why is your torso on a John Deere bulldozer?”)

Yes, yes, yes… we’ll get to The Unexpected Reappearance of He Whose DNA Sullied Connor’s Inexplicable SUV — I say “inexplicable” because he’s a single guy, and that’s a lot of car — in a moment. For now, let’s recap the action from “Best Christmas Ever.” 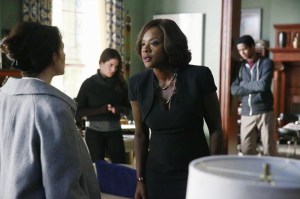 THE REAL HOUSEWIFE OF CRAZYTOWN | When a strange woman with a bogus DUI case comes callin’, Annalise assumes it’s a reporter trying to get a look inside the home of Lila Stangard’s killer. Turns out, though, this mousy chica is looking for a plea deal — her very bad husband began abusing her back when she was a runaway, and now that they’re a married couple, he’s got two kidnapped teenagers trapped in their basement — and one of ’em is pregnant. Despite the Keating 5’s disdain, Annalise stays the course — “What? Have none of you ever done anything bad that you need a lawyer for?” she asks, in the episode’s most delicious bit of truth — but turns out there are even cases that leave Annalise throwing up her hands and considering teaching a course called “How to Put This Sick Bitch Behind Bars for a Decade.” When Wes plays back interview tapes and realizes Jackie has been raising one of the abducted girls’ children as her own — and has left her unattended in an undisclosed location ’til she’s guaranteed a deal with no time served — Annalise takes the nuclear option. She lies about the DA accepting her plea, sees the little girl returned, and then finally goes into a quiet interview room with her client and tells her she spinning a tall tale just to save a little girl’s life. “You’re not the only good liar in this room,” she hisses — putting a quarter in her recently emptied Karmic piggybank. 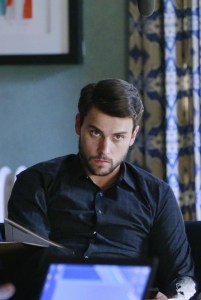 HE KNOWS IF YOU’VE BEEN BAD OR GOOD | We get flashbacks to all of the Keating 5’s holiday breaks — or in Michaela’s case, breakdowns. Yep, She Who Is Secretly From the Backwoods Bayou gets crunk on champs at the NYC Mayor’s New Year soiree and embarrasses Aiden, who postpones the wedding (without noticing the pawn-shop ring his intended is using to hide her lost diamond). Laurel, meanwhile, goes home to a swanky Palm Beach mansion, pisses off her parents with some real talk, and marches outta there with a grin on her face. Wes and Rebecca, meanwhile, are still in their ramshackle apartment in Philly, where he’s having bad dreams and starting to obsess over the claw marks in his wall and the fact that the studio’s former occupant is still getting Christmas cards from his Grandma at said address. Asher, meanwhile, is bro-ing out at bars with Frank. Connor is surprising his sister with his sudden conversion to adulthood (he formerly prayed at Our Lady of “Slutty Little Brothers”) and also falling reallllly hard for Oliver (aka the only person on the planet he currently trusts and wants to watch old TV mini-series with instead of studying).

Oh…and did we mention Annalise? She checks into a hotel room where she obliterates the minibar on the daily (or maybe every time the clock hits 12) and subsists on room-service pancakes, Kit Kat bars and a whole lotta tears. OK, so she helped dispose of Sam’s body like it was a couch with a giant red-wine stain and an unseemly hole in the arm. But apparently, there’s still plenty of guilt or remorse or disbelief or grief (or some combination) she needs to work through. Which is more interesting than if our protagonist maintained a constant state of sociopathic cool, yes? 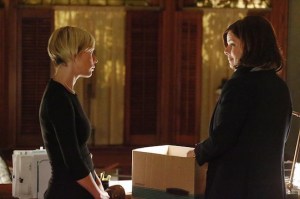 HARD-HEARTED HANNAH, THE VAMP OF UPSCALE NEW ENGLAND | When Annalise comes home from “visiting her mother” — is her mother’s maiden name Stoli? — she’s greeted by Sam’s sister Hannah (Marcia Gay Harden, as clipped and polished as Martha Stewart instructing a plebe on how to fold a fitted sheet). Why isn’t Annalise returning her calls? Why isn’t she putting up fliers? Annalise claims Sam has fled Philly — to avoid getting arrested for Lila’s murder, but Hannah notes that, um hello, he’s married to one of the most fearsome defense attorneys of all-time ever. When Annalise offers nothing more than a box of evidence, Hannah starts following her — all the way to Nate’s house. Hannah’s judge-y — as you’d expect from someone who’s never seen Nate’s naked torso. She also gets a whiff of panic off the Keating 5 (meeting out on the front porch as Laurel demands they all share details of their lives and be real with each other — to avoid cracking under all the pressure). She even appeals to Bonnie, sensing a churchmouse in distress: “Annalise could get this case thrown out with her eyes closed!” she coos, noting nobody at the sorority house saw Sam the night of Lila’s death, and none of his DNA was found on the victim. Frank cuts the chat short, though, which leads to the aforementioned chicken dinner.

Annalise cooks this meal, people — and it’s not like she went to Boston Chicken and just put it in her best white China bowls. There’s rolls and everything! But Hannah doesn’t want food — she wants to know “what this performance [of Annalise’s] is all about.” (Aha! The psychologist knows an act when it’s being played out in front of her.) And so Annalise tells the truth — or, well, some scraps of the truth to try to cloud Hannah’s mind with suspicion about her brother. Yes, she began sleeping with Nate over the summer — but after Sam’s affair with Lila began. And yes, she knew about Sam’s indiscretion long before the night of his disappearance — she’d even pulled illegal stunts to bury evidence. Hannah is gobsmacked — part of her was holding onto the belief that Annalise was hiding Sam away somewhere — and we see her beginning to wonder… “Could he have done it? Did he drive to her house the weekend after killing a co-ed to indulge in some lobster and fix her screen door?”

But like I said, the moment is fleeting… we cut back to Wes arriving home to Rebecca, whose Fuzzy Animal Viewing Hour has been interrupted by a grisly news report: The police have found a dismembered body in a landfill — and it’s believed to be that of Sam Keating. As our previews show — the revelation means that chicken dinner is going to be totally and completely wasted. 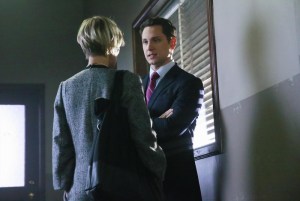 IN OTHER NEWS… Frank’s been hard at work — paying off a police officer’s wife in upstate New York to report she’d seen Sam at a rest stop, and (at Laurel’s suggestion) stealing (and presumably destroying) Connor’s DNA-covered car. Nate’s told his ailing wife all about Annalise — and the dying woman is… happy for him? (Worst. Pillow talk. Ever.) And after repeatedly disrespecting her in front of his fellow students — and threatening a sexual harassment suit — Asher finally comes clean to Bonnie. “You hurt my feelings. A lot. You were mean to me for no reason.” Aw man, and after he showed her his horizontal mambo, too! Bonnie’s face is totally contrite — and maybe a little flattered, too. Methinks there’ll be more awkward belt-unbuckling in their future before the season’s out.

And on that note, I turn things over to you. Do you think the police will find any evidence (i.e. Michaela’s ring?) with Sam’s body? Are those claw marks in Wes’ room significant — either currently, or perhaps for Season 2? How worried should Annalise be about Hannah’s presence — or is she just a temporary nuisance to soon be swatted away? And which could are you more invested in: Connor-Oliver or Asher-Bonnie? (We will also accept Connor-Asher, if you’re feeling a little contrarian today!) Sound off below!