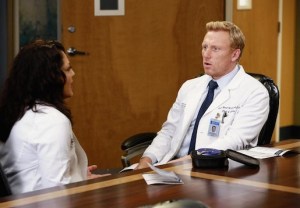 As April and Jackson awaited test results that would tell them what kind of osteogenesis imperfecta Baby Boy Avery has, she took the former approach to the suspenseful situation (hope for the best), and he took the latter (plan for the worst).

So, as you can imagine, this week’s Grey’s Anatomy was fraught with tension. Think you can handle it? Keep reading…

STRESS TEST | Though Jackson insisted that, like April, he didn’t believe that their son had Type 2 OI (the usually fatal form of the brittle bone disease), he still wanted them to decide together — in advance — what they would do if they were wrong. She, on the other hand, didn’t want to consider that dire possibility unless or until they had to. Furthermore, she admitted, “I think you already know what you would want to do,” and challenged him to say it aloud. “I think we should terminate,” he confessed. In response, she admitted that, regardless of the test results, that wouldn’t be her choice.

Later, as they continued their debate, April’s mom arrived and ushered her off to church. That evening, Mama Kepner forcibly framed the matter as being between April and her God rather than April and her husband, sparking a furious argument with Jackson. When it got to be too much, April lost it and wailed that “I don’t know anything except that I’m scared and sad and alone… and the louder you get, the more terrified I become.” (Beautiful work by Sarah Drew, by the way.) As the hour came to a close, Herman was just about to reveal to the Averys whether the baby was Type 2 or 3. We faded out before she did so, but based on the tearful scenes for next week, I think we all know what the test results say, right?

HARD SELL | After an overtly flirty meeting with a comely tech rep peddling transducers (which, thanks to The Rocky Horror Picture Show, I’d always thought were made-up alien gadgets), Owen and Callie happened upon the woman at their local watering hole. Considering it fate that, of all the gin joints in Seattle, the salesperson would show up at theirs, Torres told fellow singleton Hunt, “You gotta get back in the saddle, and she’s got a nice saddle.” When he hemmed and hawed, she then took matters into her own hands, approaching the rep and singing Owen’s praises.

Trouble was, he wasn’t her type. Why?!? Callie asked. “He has a penis,” the woman replied, thus revealing that Torres has the lousiest gaydar since Mr. Roper. Worse, as flattered (and flustered) as Torres was, she turned down her admirer’s offer of a one-night stand. “Have we used up all our happy?” she asked Owen later. Since he ended the hour pining for Cristina, we’ll take that as a yes… but only for the moment.

BUSY BODIES | Speaking of characters who haven’t been getting any lately, Mer spent “The Bed’s Too Big Without You” trying not to miss Derek by cuddling up with Zola, lecturing Alex on what to do if she texts while he’s getting busy with Jo and battling a monster tumor with her 3D printer, Bailey and Maggie. During an all-nighter with her colleagues, she noted that Derek had gone away many times, and the empty bed had never bothered her. But “this time, he’s gone, and I know he’s gone,” she said, “and the bed feels lonely.” The rest of the conversation was fairly light till Maggie chimed in with the sad tale of her one serious boyfriend. Wonderful as he was, she found it so impossible to sleep with anyone next to her that when he proposed… well, as she put it, “He is now married to someone who loves to spoon and snuggle.” Even more sadly, she added, “I may be too good at being alone.” At least as the episode drew to a close, we saw that a) Jo had learned the proper way to receive a text during intercourse, and b) Mer had placed a call to Maggie rather than toss and turn with her 3D-printed tumor for the world’s grossest teddy bear.

QUICK STUDY | Meanwhile, though Amelia swore that she was going to get to know Herman’s tumor so well, she’d be able to reveal “what street it grew up on and where it lost its virginity,” the maybe-dying-maybe-not doc took the Jackson approach to the unknown (plan for the worst) and collected the “most screwed-up” cases around to give Arizona a crash course in fetal surgery. When Amelia noticed that Herman had not one but two stacks of cases to tackle, Nicole explained that the first stack was the ones she and Arizona could get to for sure.

And the second? “You should just think of them as babies who will die if you’re full of crap.” (No pressure, Shepherd!) Later, after witnessing Amelia flummoxing the residents with her game plan for Herman’s tumor, Richard was reassuring Derek’s sister that she was brilliant. Just then, Stephanie burst in – all of a sudden, she understood! And all of a sudden, Amelia didn’t need any reassurance that she was brilliant.

Okay, your turn. What did you think of the Chandra Wilson-directed episode? What would you do if you were in Jackson and April’s position? Hit the comments!