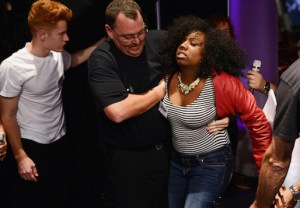 Pay no attention to the girl collapsing dramatically at center stage. She is as relevant to bigger picture of American Idol‘s 14th season as Kris Jenner is to the Mideast peace process. (And 10 points to Gryffindor if you asked, “What is a Kris Jenner?“)

Instead, gather up those precious snippets of future Chris Daughtrys and Haley Reinharts singing. Because, bound together in a tightly edited Group Rounds episode, we saw 10, perhaps even 15 vocalists who reminded us not only of the past glories of The House That Made J.Hud an Oscahhh Winner, but also of its future potential.

Like the endless buffet at Golden Corral — I’ve never been, but I have heard the siren call of their “Take-Home Yeast Rolls” ad campaign — there was almost too much to digest in the hour. But hey, this is why we have a DVR rewind function —and why Melinda Doolittle and I bring you an episode of Reality Check every Monday (or occasionally Tuesday) from January ’til early June.

With that said, let’s jump right into handing out a series of awards based on the episode’s continuation of Wednesday’s “Lines of 10” and foray into the first batch of stressed-out quartets.

LEAST COMPELLING CLIFFHANGER SINCE THAT TIME SOMEBODY ON X FACTOR WENT ON AN AMBULANCE
I understand why Idol’s producers felt compelled to show us Gabby Zonneveld’s emotional collapse after losing her place on “Bottom of the River,” but their decision to stretch it out over two nights was as baffling as the judges sending her through to the next round.

THE KREE HARRISON QUIET STORM AWARD
Katherine Winston’s “Wild Horses” was SmartWater clear and very refreshing. She needs to amp up the emotion in her eyes if she wants to connect with voters, but I could listen to her voice all day.

BE AFRAID, CARRIE UNDERWOOD!
Them’s fighting words, I know. (Meanwhile, Carrie shivers inside a mansion made of gold bricks.) But that 16-year-old Maddie Walker has not hit a single bad note this season — and her cover of Sugarland’s “Already Gone” was a study in balancing power + restraint.

SHE’S TOTALLY RIGHT, BUT STILL KINDA WRONG
Loren Scott nailed it when she said she can make a lot of money for the Idol franchise — or some kinda record label — because she makes Helen of Troy look like something that crawled out of the Dumpster behind Stop-N-Shop. But her helium-squeaky tone always seems to land at the corner of Yikes Ave and Not So Sure About That Blvd. I don’t see her thriving without the help of studio wizardry.

HER AGAIN?
The judges told Shi Scott at her audition to focus on her own artistry rather than rely on simple mimicry. And yet there they were applauding a rendition of Duffy’s “Mercy” that was so paint-by-numbers you could buy it for $2.99 at the local KMart kids’ department.

HIM AGAIN!
Rayvon Owen’s “Ordinary People” had so much rise and fall, so many delectable little nooks and nuances, that I’m seriously considering recording the audio onto my iPhone, seeing if I can play said file on iTunes, and then play it on repeat ’til it challenges Haley Reinhart’s “Bennie and the Jets” as my No. 1 most played jam of all time.

CHILD, PLEASE
I sincerely hope we’ve heard the last of Daniel Seavey macking on Jennifer Lopez. I mean, he still loves his mother’s cookies in a baked-goods kinda way, so I just cahhhhn’t with the babyfaced lothario business. Also, I think we need a moratorium on youths singing Ed Sheeran tunes whose lyrics they do not yet fully understand.

DO NOT BE SHOCKED BY A PHILLIP PHILLIPS-IAN TRAJECTORY!
Clark Beckham has P2’s t-shirt and jeans coolness and his scruffy-dude intonations — but the way he wraps it around straight-up soul jams is kinda intriguing. His feral howl on “Let’s Get It On” had me saying “mmmhmm” re. his “if the spirit moves you” message.

CAUGHT IN A BAD SHOMANCE!
Current front-runner Jax is waaaay too talented to waste votes on a stupid producer-approved showmance. Then again, if the object of her affections, Qaasim Middleton, doesn’t dial it back with his “everything but the InSinkErator” approach to vocals, he may not be around to tempt her for too long.

THERE’S WILLIS!
For the last five weeks, producers have held back on showing us sumblimely soulful David Oliver Willis — who famously offended Nick Minaj with a terrific take on “Fever” during Season 12’s Vegas round. But his closing glory note on “Signed Sealed Delivered I’m Yours” — part of a rock-solid group along with Clark Beckham and Jesse Cline (sorry, J.None kinda went awry) — reminded us he’s once again one to watch.

SWEET DREAMS AREN’T MADE OF THIS
Tyanna Jones’ mom did more mentoring in 10 seconds of screen time with the “Dream Team” group than Randy Jackson did in all of Season 13. Honestly, though, her daughter was the only one who deserved to advance after a cover of “I Want You Back” that was as tuneful as an Emergency Broadcast signal. Most surprising of all was black-lipsticked Maddy Hudson barely hitting 50% of her notes.

GO DIRECTLY TO THE TOP 24, DO NOT PASS “GO” AND DO NOT COLLECT $200
Team Dimples — the foursome of Michael Simeon, Nick Fratiani, Jaq Mackenzie and Hunter Larsen — proved so entertaining with their cover of “Rude,” I kinda wanted ’em all to be rewarded with an automatic trip to the voting rounds. OK, not really, Jaq’s sing-speak style can get a little whiny, and we didn’t really hear enough of Nick to judge, but Michael and Hunter — if they get inexplicably cut by the judges, they could make a very appealing Paul McDonald-Kendra Chantelle type duo.

THAT GIRL WHO COLLAPSED AT THE END OF THE EPISODE?
Oh, please, we’re not discussing her.

On that note, I pass the mic to you. What did you think of the second installment of Idol’s Season 14 Hollywood Week? Sound off in the comments!