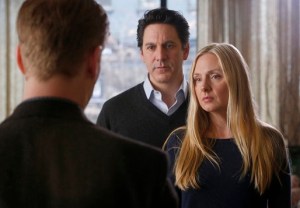 The Spy Who Cooked Me Dinner and Tucked Me Into Bed.

That could be an alternate title for NBC’s new Russian spy thriller/family drama Allegiance. But did the twisty turns of the covert O’Connor clan capture your loyalties during Thursday’s series premiere?

Before you weigh in with your thoughts, a recap of the pilot: Alex (Gavin Stenhouse of the UK’s Iconicles) is a newbie CIA analyst who’s only been on the job for 129 days. Yet already, he’s being recruited for a special case when a SVR (AKA, Russian foreign intelligence) agent announces that she wants to defect.

The high-profile assignment draws the interest of the SVR, who come calling. Unbeknownst to Alex, his parents Katya (The Newsroom’s Hope Davis) and Mark (Gilmore Girls’ Scott Cohen) are sleeper Russian spies along with their eldest daughter Natalie (Revenge’s Margarita Levieva). The SVR is worried that Alex’s case will reveal the identity of all their assets, including his own family, so they want Katya and Mark to recruit him to spy for the Russians.

Katya would rather turn herself into the FBI than do that. “The only way I have to protect my home is to burn theirs down,” she explains to Mark. Her husband, however, doesn’t see a future without her. Back in Russia, Katya was tasked with recruiting Mark, who is a defense contractor. He refused, but they fell in love anyway, and the KGB let her leave the country as long as she kept spying in America.

“My life is with you,” Mark says. “What kind of life do you think I’d be going back to? … Tell me I didn’t do this all for nothing.”

So they propose a different plan to the SVR: they will spy on “not normal” Alex — he didn’t speak until he was eight — and erase any evidence that leads to them. They successfully plant bugs in his phone and car, but the scheme goes awry when Alex recognizes the dead man he’s investigating as his mother’s childhood friend. He offers his parents a choice: “Tell me everything, from the beginning, or I can turn you in.”

The series has been getting a lot of justified comparisons to FX’s The Americans — this could certainly be a variation of Paige’s future — but there are also plenty of differences. (For better or for worse, you be the judge.) And because I wouldn’t be me if I didn’t do this, I grade the American actors’ Russian speaking skills — the Leningrad-born Levieva is, of course, fluent — at a solid B.

What did you think of the spy drama? Grade the premiere below, then hit the comments to back up your pick!