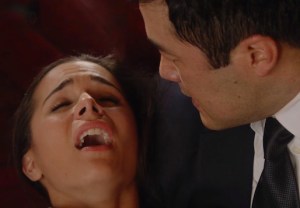 The following contains spoilers from this week’s episode of The Mentalist.

With just three episodes left to air, CBS’ The Mentalist this Wednesday night pulled the trigger on a catalytic final story arc for Patrick Jane, by killing off FBI Agent Michelle Vega. Though a new recruit to the team, Vega’s tragic death in the line of duty has sparked something in Jane, whose tie to law enforcement as of late has been tenuous.

TVLine spoke with showrunner Tom Szentgyorgyi, as well as Vega’s portrayer, Josie Loren, about uncorking this sad twist, why it has hit Jane so hard, and what fans can expect from the series finale (airing Feb. 18).

TVLINE | Josie, what did you know and when did you know it, regarding Vega’s fate?
JOSIE LOREN | Actually, the day before I started shooting the first episode, Tom called to let me know what was in store. They didn’t want me to be surprised. They wanted me to know going into it, and that I was to say nothing. It was a secret for a while.

TVLINE | Tom, once this was announced as the final season, did you know you’d want to kill someone off to activate Jane’s final journey?
TOM SZENTGYORGYI | Very much. And I called Josie because we wanted to be absolutely clear that when that news broke, it wasn’t a comment on her performance.
LOREN | [Laughs]
SZENTGYORGYI | We knew that we wanted in this last batch of episodes to sort of take the show back to the beginning. Jane’s character was born out of trauma, in effect. The person that we watched for seven years was shaped very much by violent death. And though we had captured Red John and put that part of the story behind us, we knew we wanted to go back to that world — and that would involve killing someone.
LOREN | And I could not be happier that I got to be that person!

TVLINE | Can you elaborate a bit on Jane’s reaction, his speech to Lisbon in that closing scene? He’s only known Vega a short time, after all.
SZENTGYORGYI | Exactly — and that was also deliberate. We decided that because Jane has already lost people who at that point were the most important people in the world to him, we didn’t want to revisit that, Job-like, by killing another good friend. What we wanted was someone who would bring to the fore both the risks of the work — how people 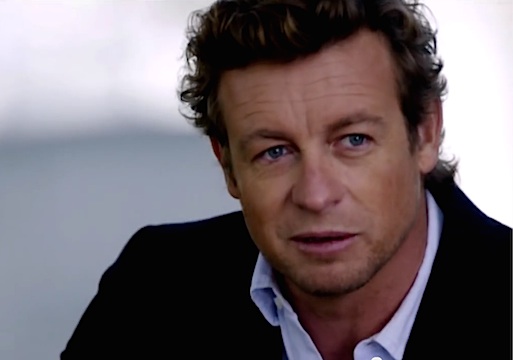 can die even when they’re brave and smart and careful, as Vega was — as well as the idea that beginning a relationship, recommitting himself to love and to life, was going to have risks. And given his history, he might be reluctant to undertake such risks. His love for Lisbon meant risking losing Lisbon, just as he lost his wife and daughter, so for us the death of Vega was a way to really bring that home. He cares for Vega, and one of the nice things in this last stretch of episodes is seeing how warm and real that relationship felt. But Lisbon is the love of his life, and the risk to her and the risk to him, the risk loving brings with it, is utmost in his mind now.

TVLINE | Josie, can you clarify what all Vega was agreeing to with Wylie before she died? Were they on the same romantic page, or…?
LOREN | It’s funny you ask that because when we were shooting the scene, I was originally playing it very Vega-esque — she isn’t really demonstrative, she doesn’t flirt with him — because I wasn’t too clear on what exactly she was agreeing to, as you said. And then the director led me in the direction of, “No, you’re giving him an open door without being over the top about it, being as casual as possible.” Wylie is someone that she grew to really enjoy. 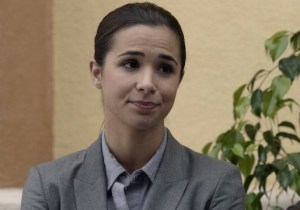 It’s nice because he is such a contrast to who she is, she almost needs people like Wylie in her life.

TVLINE | And now she’s gone and devastated him by dying.
LOREN | I know…. I feel bad.

TVLINE | As sad as it is to leave the show, at least it frees you up right in time for pilot season.
LOREN | Yeah, it’s one of those things where it was so bittersweet — I would have loved to have done the full 13 episodes, because the cast and crew is just awesome. I had the best time. But at the same time, it worked out really well in terms of being available for pilot season.

TVLINE | Tom, are we going to see more of Wylie’s reaction in these last few episodes?
SZENTGYORGYI | Very much. You’re going to see everyone’s reactions. We wanted to create what had been Jane’s situation at the start of the show, which was him struggling to deal with a death, and show the rest of the cast dealing with a similar thing. Some will deal with it well, some will deal with it not well. Wylie’s certainly one of the people feeling it most keenly, and who’s freshest to this experience. 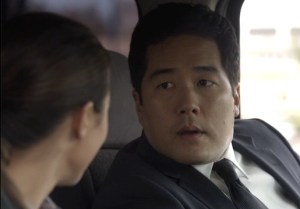 will this galvanize him in this new role of responsibility, or will it shake him a bit?
SZENTGYORGYI | I don’t want to give away too much, but you’re going to see some very specific responses.

TVLINE | Interesting. Because I was debating with someone if the last episode would be “Black Out” — as in the absence of all color — or “White Out,” as in the presence of all color.
SZENTGYORGYI | No, no…. But several people have noted that with “Brown Shag Carpet” we have come up with the ugliest title. And that’s mine, of course!

TVLINE | Can you give me three words to describe the series finale?
SZENTGYORGYI | Three words? How about four — “All you’ve hoped for.”