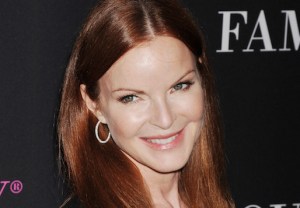 Marcia Cross soon will make her TV return as a possibly depraved housewife.

The Desperate Housewives alum has been cast as a suspect on an upcoming episode of Law & Order: SVU, E! Online reports.

Cross’ first role since Desperate‘s Bree will be Charmaine Briggs, the latest in a long string of novelist Walter Briggs’ wives. Walter’s daughters think Charmaine is sexually abusing their dad — hence the involvement of Benson & Co. (If the case reminds you of of Casey Kasem’s family drama, that’s no accident.)

Walter will be played by Robert Vaughn (The Man From U.N.C.L.E.); Susie Essman (Curb Your Enthusiasm) and Mercedes Ruehl (Big) also will guest-star in the episode.

Desperate Housewives ended its run in 2012. Since then, Cross was attached to the Fox comedy Fatrick, which didn’t make it past the pilot stage in 2013.