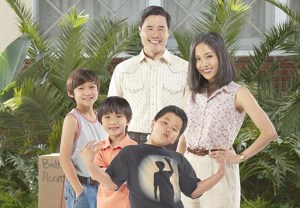 At least, that’s the culture shock-filled experience of the Huang family in ABC’s new comedy Fresh Off the Boat, which debuted Wednesday.

Adapted from chef Eddie Huang’s 2013 autobiography, the series centers on a young Eddie (played by newcomer Hudson Yang), as his family relocates from Washington, D.C., to Orlando in order for Eddie’s dad (Randall Park, Veep) to focus on his steakhouse, Cattleman’s Ranch.

Rounding out the family is Constance Wu (Eastsiders) as Eddie’s mom, Jessica, and adorable newcomers Forrest Wheeler and Ian Chen as his younger brothers, Emery and Evan.

PHOTOS Exclusive Once Upon a Time Photos: Regina, Emma, Hook and a Repentant [Spoiler]

Unfortunately, the move to Florida doesn’t bring the culinary success that Eddie’s dad anticipated. It only brings humidity (which does serious damage to Jessica’s hair), lactose intolerance for Evan and a few bullies at Eddie’s school, one of whom drops a racial slur in the middle of the cafeteria.

Of course, their new suburban lifestyle isn’t without its perks — free samples at the grocery store! Onion blossoms! Lunchables! — and Eddie’s dad has enough sunny optimism for the whole family. It might not be easy, but the Huangs are willing to give Orlando another shot.

But will you give Fresh Off the Boat a second chance? Grade the premiere episode via our poll below, then hit the comments to back up your choice!