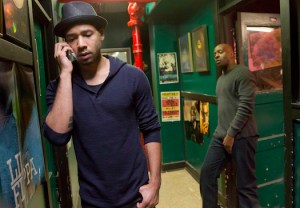 She can turn the world on with her smile. But the comparisons between Empire‘s Cookie Lyon and The Mary Tyler Moore Show‘s Mary Richards end right there.

OK, so minus the recently completed 17-year prison sentence, Taraji P. Henson’s glorious alter-ego is a real go-getter with a penchant for multitasking, dropping quotable zingers and overcoming whatever obstacles the universe throws in her path.

But this week’s episode, “Dangerous Bonds,” reminds us there’s a big difference between Mary cracking up during a clown’s funeral and Cookie using a young diva’s bisexuality as leverage, blackmailing her eldest son for a slot on Empire Entertainment’s secret board and, oh, paying $5,000 to a family friend to snuff a rival’s life (albeit to seemingly save her own).

Yeah, in other words, a big week for She Who Cannot Say No to Leopard Print. All this, plus Lucious proposing to Anika (and then twisting her doctor dad’s arm for a favor); Jamal sending his brat younger brother to the ground with a punch to the gut (not quite a beat-down with a broom, but…); and the continued misadventures of spinoff-worthy Porsha. Let’s get to it! 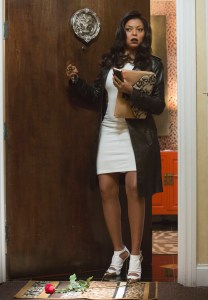 THAT’S THE WAY OUR COOKIE CRUMBLES | Cookie, all dressed up and ready to raise hell at Jamal’s latest recording session, gets tracked down by Agent Carter to testify in a grand-jury proceeding against extra-scary drug dealer Frank Gathers — who might have found a way to appeal his case and get out of jail. At the end of her testimony, Cookie learns that the man she saw get gunned down by Frank was an FBI agent — and she realizes the situation is twice as scary, labeling herself a “dead bitch walkin’.” When she finds a red rose outside her door — the same flower that used to be Frank’s symbol — she assumes it’s a warning from Frank’s twisted henchman Teddy — and she hails a cab to Philly to dish with her sister what she should do. They wind up paying $5,000 to a family friend — “you do know what I mean by handle this bastard, right?” Cookie asks ominously — and her murderous fate it sealed. But then who shows up at her place but Lucious — noting how he’d never forget their anniversary, not after that time back when they were broke and poor and Cookie attacked him with a stiletto. Cookie’s face softens as she remembers how Lucious stole her a single rose — and then the realization hits her. That doorstep gift was from her ex, not her executioner, but she’s too late to stop Teddy from getting gunned down at an intersection. Just like the blood of the agent splattered her face back in that deal gone wrong, our protagonist is once again in the midst of the horror — only this time, she’s the (unexpectedly) guilty party. Will this terrible, homicidal misstep somehow mute the spring in Cookie’s step? Time will tell!

BOO BOO BRIDEY | Lucious gives Anika an 18-karat ring — same as the one Richard Burton gave to Liz Taylor — and even has Anthony Hamilton on hand to provide musical accompaniment to his proposal. But when the happy couple visits Boo Boo Kitty’s disapproving parents to break the news, there’s a little twist. Lucious needs a physician to sign a clean bill of health — and ignore his ALS diagnosis — so that Empire can continue with its IPO. Anika’s doctor daddy is appalled — using the words “criminal” and “thug” to denigrate his future son-in-law — but then Lucious plays his trump card. When he dies, Anika will “be a billionaire in her own right.” Suddenly, dude’s not so aghast about committing medical fraud, and his Hippocratic Oath gets twisted into, “First do no harm — to the family’s financial future.”

BI, GURL | The hour opens with Tiana and Hakeem rocking the red carpet as a new power couple — although the latter artist struggles to remind the interviewer he’s more than a mogul’s son and that he’s got a new single dropping. Turns out, though, his vision for a video for “Drip Drop” (a song that’s kinda icky to this old man’s ears) is going to cost three times the budgeted amount. “If you can’t find money for this, I really don’t know what purpose you serve,” Lucious says blithely to Andre — and so the eldest Lyon devises a plan: Find a way to put Tiana in the video, too, and use her promo money to close the gap. Rhonda helps make the plan a reality when she captures footage of Tiana canoodling with her female lover India — I didn’t see that one coming, did you?! — which she eventually uploads to Perez Hilton. Hakeem gets outraged by this newsflash — til Tiana reminds him that he, too, has a “side piece.” Cookie, on the other hand, takes a more pragmatic approach: “All right, look, girl — I don’t judge. But yous a freak — and that’s a good thing. We can sell that.” The video shoot winds up being successful, after Lucious intervenes with some outdated 1980s logic that Tiana + India = two girlfriends for Hakeem. “It’s a mathematician’s dream — it’s trigonometry,” dad says, showing a fundamental lack of understanding about mathematics and same-sex attraction. (If Woman A is dating Woman B as well as Man C, does it automatically mean Woman B will want to have sex with Man C? Pick up your No. 2 pencils and begin the test…) 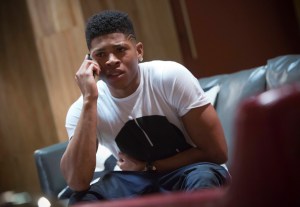 WELCOME TO “GHETTO-ASS STUDIO” | Jamal winds up at a studio so ratchet and bullet-riddled, Cookie has to warn the producer that she’s packing heat — should anything happen to her baby. He’s there to record “Dollar Bill” — his song inspired by his foray into low-budget living — and via phone, Cookie is able to clue him in that “talkin’ before the record starts is so dated.” Alas, though, a fruitful day at the studio is interrupted when some of Hakeems’ hangers-on come in — guns in hand — to rob Jamal (the seed deliberately planted in their heads by a scheming Andre). Jamal lets ’em know, though, that Hakeem’s “sissy brother” isn’t scared, but while the thugs go running after the studio owner brings out his own weaponry, Jamal is forced to gather together a new band of newbie musicians to get the most out of his single day of studio time. When Cookie arrives, the studio is packed with folks bobbing their heads to a sick beat, but despite her huge grin of motherly pride, she determines Jamal’s voice is too buried in the mix. “If you had it we wouldn’t need to be fixin’ it!” she howls to the producer, and it turns out, she’s right.

It’s not a storybook ending, though. Jamal goes to visit Hakeem — blaming him for the robbery and for ultimately trying to destroy his recording session with gun violence. “You always come to me for advice — I’m gonna give you some advice,” Jamal says, leveling Hakeem with a punch to the gut, “Don’t ever underestimate me, little brother.” Instead of begging for forgiveness, though Hakeem calls Andre — and asks for the release date of his video to be pushed up, the better to outshine Jamal’s future single. When is this kid gonna grow up?! I mean, he’s already riding fake jet-skis, so it’s time, no? 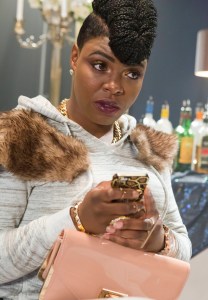 On that note, I turn the discussion — including Portia subbing for Cookie at Tiana’s shoot — to you. What did you think of this week’s Empire? Hit the comments with your thoughts!