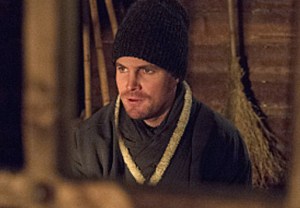 Though it made the eventual moment no easier to watch, you had to see it coming.

Midway through this Wednesday’s episode of The CW’s Arrow, Tatsu warned a departing Oliver, “To defeat a man like this Ra’s al Ghul, you must be willing not just to die but to live knowing what you have to sacrifice in order to beat him… whatever you hold most precious.” And we all know what/who that is.

But before we got to that loss, there was a big win to be had — with a little help from Team Arrow’s friends. With the Glades under Brick’s unchallenged rule, and after declining Malcolm’s offer to join forces (though Roy and Laurel were inclined to vote yea), Team Arrow rallied Ted Grant, Sin and scores of other townfolk to join in the fight, and fight they did.

During the melee, Ted aka Wildcat got in some licks against Brick, only to then get pummeled within an inch of his life by the brute. Malcolm, in 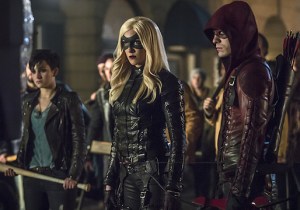 Dark Archer regalia, then showed up to do his own whaling on Brick, whom he had learned was responsible for killing his wife/Tommy’s mother some 20 years ago — a tragedy which prompted the Merlyn patriarch to briefly abandon his son and have his “anger forged” by the League of Assassins.

But before Malcolm could go for the kill, using the same gun Brick used all those years ago against a “weak,” begging Rebecca, Oliver resurfaced. Don’t do it, he argued, if only for the sake of Thea, who would never forgive him.

Later, with Brick in SCPD custody, the Arrow addressed the townsfolk, saying, “You did not fail this city, and I promise I will not fail you by leaving it again!” Cheers.

Alas, the reception Oliver got back in the Arrowcave was decidedly chillier, once Felicity realized that he was aligning with Malcolm, in the name of 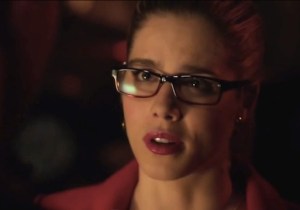 learning how to defeat Ra’s al Ghul. Outside in private, Felicity explained how she thought that if and when he came back from the dead, that he would do things differently — when it comes to them, Oliver deduced. Before leaving, “You said you loved me,” she reminded. And then his first words back are about allying with the “monster” who turned the sister Oliver loves into a killer, and then killed a woman he loves. Given that track record and Oliver’s insistence on studying under Malcolm, “I don’t want to be a woman that you love,” Felicity said, before walking away.

Elsewhere in the hour….
* Oliver invited Tatsu to come to Starling City with him, but she declined.
* Quentin knows Roy is Arsenal/The Red Hood/whatever. Points for that!
* Sin alerted Quentin that the current Canary is not his daughter Sara.
* Oliver explained his absence to Thea by saying he got into some trouble in Bludhaven, winding up behind bars.

What did you think of “Uprising”?