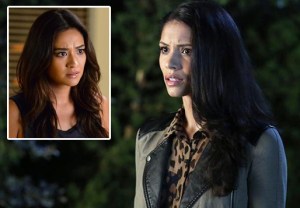 Now that Talia has made her intentions (to jump Emily’s bones) known, it’s time to look to the future of Pretty Little Liars‘ newest potential couple.

“I think Emily really admires Talia,” her portrayer Miranda Rae Mayo tells TVLine. “Emily sees how professional and driven and put together she is. There’s definitely something sweet and sincere between them. We also haven’t really seen Emily with someone who isn’t her peer in high school before, so that’s different.”

Speaking of not being Emily’s peer, Mayo assures us the age gap between her and Talia is not so drastic that we should alert the Rosewood P.D. (Not that they’d do anything about it.)

Read on for our full Q&A with Mayo, which includes her personal message to all you hopeful Paily and Emison ‘shippers.

TVLINE | From what we’ve seen, Talia seems a little shady. What’s she hiding?
Just like everyone in Rosewood, Talia definitely has some secrets, and those secrets may affect Emily. All will be revealed in the weeks to come. 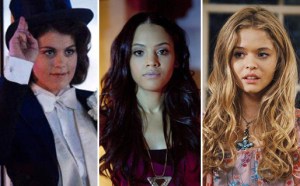 TVLINE | How aware are you of Emily’s previous romances?
Oh, I’m pretty familiar. Before Talia came along, I was a Paily fan; I really like Paige and Emily together.

TVLINE | So how do you feel about possibly replacing her?
Well, Miranda feels great, because being on that WB lot is really wonderful. [Laughs] But as a fan, they were really sweet together. I think it was sad to see Paige go, but we don’t really know how long she’s going to be gone for. It’s not necessarily 100 percent over. Everything in possible in Rosewood.

TVLINE | This show’s fans are nothing if not passionate. Have you gotten any feedback from them?
I have! On Twitter, one of the #PLL tweets was “If you could describe Talia in one word, what would it be?” Oh my gosh, the responses were hilarious and so different. Some people said “curious” or “adorable” or “annoying.” I can understand that if you’re a die-hard Paily or Emison ‘shipper, someone coming in and asking Emily these questions and being all intense is hard. At the end of the day, Talia always has the best intentions — she just doesn’t always go about things in the best way.

TVLINE | Lastly, will Talia find herself involved in the “A” drama?
It’s rare that anyone in Rosewood wouldn’t be involved in that somehow. We haven’t seen Talia be, but I think it’s possible in the weeks to come.

PLL fans, what are your thoughts on Talia thus far? On her potential future with Emily? Drop ’em all in the comments section below.