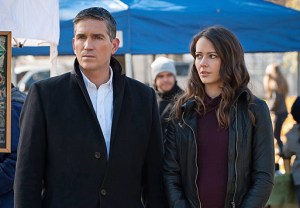 This week on CBS’ Person of Interest, Reese and Root followed the Samaritan van to a hurting hamlet, hoping to find Shaw, alive. But perhaps nothing could prepare them for what they did discover in mild-mannered Maple, N.Y.

While Fusco worked this week’s number — an improbable killer-for-hire who was about to strike again — alongside former IA officer Silva, Reese and Root found themselves in Maple aka “the biggest little manufacturing hub in upstate.” After bumping up against (and dealing with) a problematic local lawman (“Always pack an extra suitcase!”), the two begin to realize that this small town has undergone some strange changes as of late, including a new mayor and the rescue of the local factory, which now manufactures transponders for a company called Carrow.

With Finch helping remotely, Reese and Root also learn, from the CVS clerk-turned-mayor, that Samaritan has been using Maple as an “ant farm,” first bringing the sad community perfect happiness, before “shaking” things up to see how humanity reacts. Madam mayor also discloses, when confronted by Root’s tactics, that the brunette woman they seek did arrive via the refrigerated van and is being kept inside the factory. This, paired with the bloody gurney they found inside the van, suggests that Shaw is alive.

Infiltrating the factory, however, the recuperating patient Reese and Root find is not Shaw but a stock exchange secretary who had been nipped in that melee and then was used as a test subject for Samaritan’s cochlear transponders. Later, back in NYC, a devastated Root pleads to The Machine to confirm Sameen’s status, but the message delivered to her and Finch over a payphone is clear: “S.T.O.P.”

And as Root bids Harold adieu, 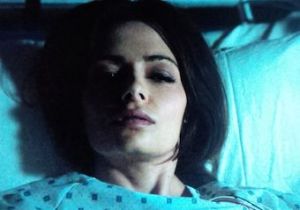 her time with Team Machine seemingly at an end, we segue to a quiet room, the only noise the beeping of a heart monitor. We then see Greer’s sinister mug, followed by a familiar woman’s voice: “If this is the afterlife, it sucks.”

From here, it is perhaps just a matter of how quickly Sarah Shahi wants to get back to work, after giving birth to the twins she is expecting.