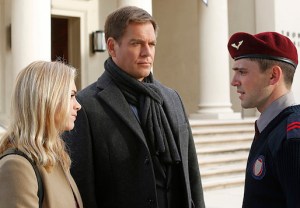 This Tuesday at 8/7c, CBS’ NCIS kicks off its February sweeps run, during which TV’s most watched drama will tackle a sensitive topic, do some mourning, delve into DiNozzo’s past and, on a lighter note, throw a party in that big orange room.

Showrunner Gary Glasberg gave TVLine a week-by-week peek at what to expect.

“We Build, We Fight,” airs Feb. 3 | Directed by cast member Rocky Carroll, this hour revolves around the murder of an openly gay and married Medal of Honor recipient. Was it a hate crime? “The story twists 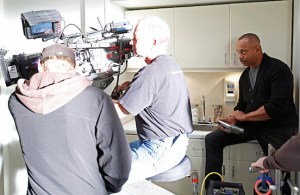 and turns, and of course we go down that road,” Glasberg says, “but not necessarily.” All told, “It’s a strong episode that touches on subject matter that I think is relevant, and Rocky did a terrific job,” the show boss notes. “I personally love when we take on subject matter that has some sensitivity to it, because I feel like we do a good job.”

Since the DoD was vetting the Medal of Honor recipient at the time of his death, Susannah Thompson puts in an appearance as Hollis Mann — though she proves to be on hand not purely for professional reasons. “She’s also there for Gibbs, at a time when he’s still dealing with the ramifications of [ex-wife] Diane’s murder,” Glasberg says. 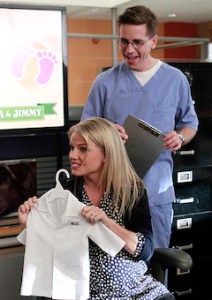 “They have some really nice scenes together.”

Serving as a “light runner” in the otherwise heavy episode is a baby shower for parents-to-be Jimmy and Breena Palmer, the former of which is “your classic, nervous dad… making everybody a little crazy!” Could a sweeps birthdate be in the cards? “Prepare to meet Baby Palmer!” the EP teases.

“Cadence,” airs Feb. 10 | As previously reported, this episode guest-stars Tanner Stine (The Thundermans) as a teenaged DiNozzo, who is seen in flashbacks attending military prep school; Steve Harris (The Practice) plays Tony’s onetime mentor/basketball coach turned school provost. “I think we captured the essence of who Tony may have been when he was younger — and any time that we can give continued insight into young DiNozzo, it only informs who he is today,” Glasberg says. Among the new intel to be gleaned: You’ll see in teen Tony “a respect [for his mentor] that carries over into how he handles himself as an agent, with Gibbs. It bounces back and forth in time pretty nicely.” 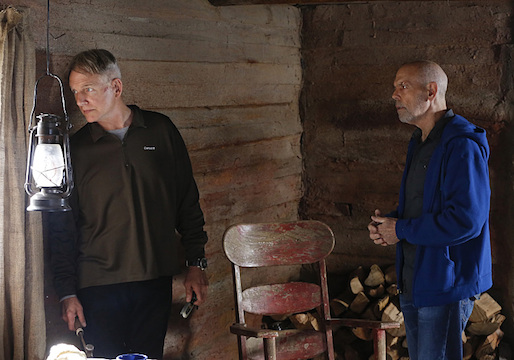 “Cabin Fever,” airs Feb. 17 | As the manhunt for Season 12 baddie Sergei Mishnev comes to a head, Gibbs and Fornell will “spend some time in Gibbs’ cabin in the woods and really hash through some of the grief and the issues they’re both facing” in the wake of Diane’s murder, Glasberg says. The result is “some really beautiful performances between [Mark] Harmon and Joe Spano. Those guys worked really hard on that episode.”

“Blast From the Past,” airs Feb. 24 | Closing out sweeps, a covert identity created for one of Gibbs’ undercover cases from 20 years ago resurfaces when a murder victim is found living under the alias. A blast from the past, indeed.

Looking further down the road, Glasberg says, “We’re going to see Delilah again,” while Robert Wagner. Jr. is due for an encore as DiNozzo Sr. And with Mishnev’s days numbered, the question is how to close Season 12 with a bang. Having sewed up last season with an atypically quiet, cliffhanger-free finale (so as to instead honor the late Ralph Waite/”Jackson Gibbs”), Glasberg hints that this time around, “I think I’m going to try and rattle people a little bit!”