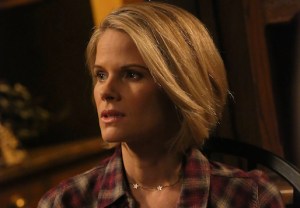 Ava Crowder is a woman caught in the middle as FX’s Justified unspools its farewell run.

On the one hand, she has bad boy Boyd Crowder laboring to keep her at his side, with the prospect of a final score that will seed their happy ending far away from Harlan. U.S. Marshal Raylan Givens, meanwhile, has the goods on Ava, having had her sprung from the hoosegow in trade for solidifying the RICO case against her estranged fiancé.

With the third episode of the final season’s 13-episode salvo airing tonight at 10/9c, TVLine invited Joelle Carter to weigh in on Ava’s divided loyalties, reveal what she hopes to pinch from the set on her way out and ponder the prospect of another big death before we bid Harlan adieu.

TVLINE | What episode are you shooting right now? And is it beginning to sink in for you yet, the end of it all?
We are finishing [Episode] 11, and we start 12 soon…. And yeah, I’m really sad! I mean, I am so happy to go to work every day. And then at the and of the day I’m like, “Oh my God, that’s one more day down.” The reality is hitting, every day.

TVLINE | I have to imagine that this final arc is pretty much every you could hope for as the person who has played Ava these past six years.
It is. They really delivered this season for me. They kept saying, “We felt like we owed you something because of jail last year.” [Laughs] Well, OK!

TVLINE | I remember when we interviewed last season, you felt a bit lonely over in that storyline.
I was very removed, yeah, being with all new cast members. Every once in a while, Walton [Goggins, who plays Boyd] or Tim [Olyphant, Raylan] would come in, but that was only toward the end. [The writers] knew why I was in there, so we could have this season, and we did our best.

TVLINE | In the episodes 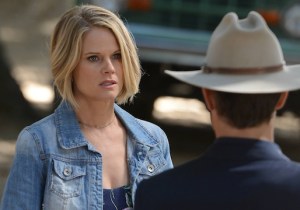 I’ve watched thus far, Ava’s done a little something that could be seen as on Boyd’s behalf, a little something for Raylan…. Is that the plan, to keep us guessing about her ultimate allegiance?
Especially in these first episodes, I feel like I really wasn’t sure where her loyalties lied. She was in this situation where she was trying to avoid the situation! But she realized fairly quickly that Raylan wasn’t going to have it, and avoiding Boyd wasn’t a reality for her to play in this game. So around this [week’s] episode is when she really grounds herself and starts to figure out that she’s just going to have to take it moment by moment and grab for the best opportunity that comes her way. She gets zonked with Boyd, and when you’re drunk and you have feelings for someone, it can wake up old feelings….

TVLINE | What is something you have learned from Walton over the years, having had so many scenes with him?
So much, oh my goodness. To take risks, big ones. In every scene, every take. We’d mix it up — “OK, we got that, let’s try something else.” Both of the men, actually, have been so generous to drive me further, to ask for more. I was very lucky.

TVLINE | I didn’t realize this, but this week’s episode features your first real scene with Erica Tazel, when Rachel leans hard on Ava to deliver some real intel.
I mean, we had been in a scene together but we didn’t say anything to each other — Raylan just kind of told her to take me away, and she takes me away.

TVLINE | Erica told me she was very excited to get this scene.
I know, I was too! We were kind of giddy. [Laughs] She gets to yell at me…. It was wonderful. I’ve been waiting for a long time to work with that woman.

TVLINE | Talk a bit about this week’s episode, in which Ava snoops around the pizza parlor where Ty Walker (played by Garret Dillahunt) and Choo-Choo are camped out….
Well, Boyd and the boys have ruined their opportunity to check it out for themselves, so they send me as a spy…. [Laughs] And I find myself in a situation I have to get myself out of, yet again. Working with Garret was amazing; he’s so much fun when we’re not shooting, a really funny guy. And then he turns into that character and you’re just terrified. When Ava sees Ty come into the room, she realizes, “I’m not going to get away with what I’m getting away with this other guy here [Choo-Choo].”

TVLINE | [Showrunner] Graham Yost told me that y’all couldn’t get enough of Mr. Sam Elliott (as Avery Markham).
He’s delicious. His energy, his charisma… just immediately you’re affected by it. And he’s still so sexy! Yeah, that [encounter airing this week] was one of my favorite scenes, because of everything he gave me as an actress.

TVLINE | And yet maybe 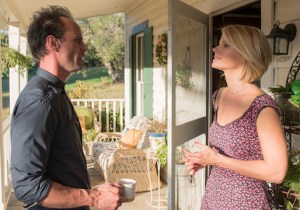 not even the mighty Sam Elliott can deter Boyd.
Right?! I know…. I think Boyd and Ava have known who each other is. It’s just, “Can she live that anymore?” That’s the big question that comes up for her. I think she really wants him to figure out how they could be together and make that happen.

TVLINE | Is there any prop you hope to grab as a souvenir once production wraps?
I have my eyes on a sign from Boyd’s office. I’ll put my vote in to have it, we’ll see what happens.

TVLINE | Have you seen the series finale script yet?
No.

TVLINE | I appreciated Graham’s honesty at TCA last month, that they hadn’t quite yet cracked how the series will end.
They’ve kind of stayed true to their outline from the very beginning. It’s just that when you’re on your way there and making it all work…. I could tell you more, but I would give away too much. But keeping the loyalties and making it justified, the way it’s going to end, for all of these characters, that is a lot to juggle, so I commend them. These writers are working overtime this season.