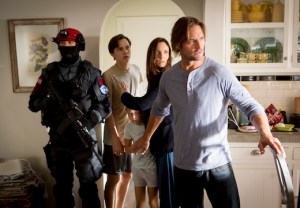 USA Network is betting on some old island magic.

The network on Tuesday gave a 10-episode order to Colony, a new alien-invasion drama that will re-team Lost star Josh Holloway and executive producer Carlton Cuse — along with The Walking Dead‘s Sarah Wayne Callies.

Cuse and Ryan Condal (2014’s big-screen version of Hercules) will serve as writers and EPs for the series, which the network describes as follows: “Colony centers on a family torn by opposing forces and making difficult decisions as they balance staying together with surviving the struggle of the human race. Set in the near future, the story takes place in Los Angeles, which exists in a state of occupation by a force of outside intruders. Some people choose to collaborate with the authorities and benefit from the new order, while others rebel and suffer the consequences.”

Holloway will play former FBI agent Will Bowman, who will be forced to fall in line with the new order to thwart a growing resistance movement; Callies will play his wife Katie.

Amanda Righetti (The Mentalist) is set to play Katie’s sister Madeline, the mother of a diabetic child who needs insulin.

“Carlton and Ryan have created an intriguing ride that uniquely provides a humanistic take on a story set in the near future,” said Chris McCumber, President, USA Network, in a release. “Josh and Sarah have incredible on-screen chemistry and brilliantly play a couple making tough choices to protect their family in an uncertain world.”

Excited about Colony? Share your thoughts in the comments!