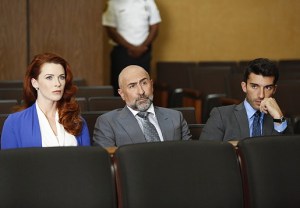 Jane the Virgin, watch your back: Sin Rostro is lurking in plain sight.

Monday night’s episode finally exposed Rose as the woman behind The Man With No Face, and she had no qualms about burying hubby Emilio alive in cement to protect her secret. Looking forward, could other characters be in danger of losing their lives to the criminal maven?

“You should always be worried once Sin Rostro’s in the room, because she’s unexpected and she plays by her own rules,” executive producer Jennie Urman warns.

But you can breathe a little easier knowing “it’s not going to take too long for the police to realize” Sin Rostro’s true identity, she adds.

Below, the EP also previews Rose’s possible conspirator, Rogelio’s next career move and Rafael’s “emotional” journey as he grapples with his father’s death.

TVLINE | At what point did you know Rose was Sin Rostro?
That was the plan from when we got together in the writers’ room and talked about it in the first week or two… I didn’t know it when I wrote the pilot. I knew there was going to be this bad thing going on in the hotel that Michael was investigating, and that’s why he had eyes on Zaz. But I wasn’t quite sure what it would be and what the tone of it should be, because drugs felt too straightforward. Then one of the writers pitched rearranging people’s faces… So once we went with that, Rose became more and more the person that we wanted it to be. It was an early-on decision.

TVLINE | Now that you’ve revealed it’s Rose, are you going to get into how she became this dastardly villain?
Yes, but slowly. In the next episode, because now we know it, but the police don’t know it, we play a little bit with that. Ultimately, we will go back through all of the hints that we’ve given in the [past] episodes that it was her. You’ll understand specifically how she did it. Then, in [Episode] 14, one of my favorite sequences is going to be shown, which is how Rose first met Luisa, how they fell in love and where she was in her plan at that moment. So you’ll learn a little bit about that. [For] deeper Sin Rostro reveals, you’re going to have to wait as they unpack. They definitely will be revealed – how she got into it, all that stuff – but that’s going to be a little bit of a wait. 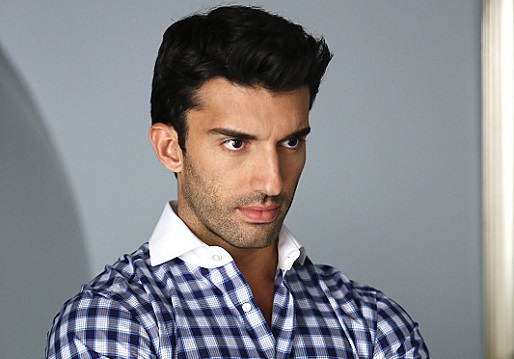 TVLINE | Rafael and Luisa still think Sin Rostro is Emilio. How is that going to affect them, thinking their father is this horrible person?
It’s something they’re going to be grappling with. Do they really think it’s him, and would their father be capable of that, is something that comes up. Ultimately, once they realize their father is dead, that throws them, especially Rafael, on a real emotional arc that will inform the rest of his season in terms of the fact that his father died thinking he was a failure and how Rafael wants to change his father’s perception of him, but it’s too late.

TVLINE | How is Rose going to go about protecting her secret from Rafael and Luisa? We saw one way…
She killed Emilio to set him up. That’s what her plan is, but it goes awry. There’s still a little bit of a mystery because in the second episode, when Zaz is impaled, Rose is actually in that scene. She was one of four people that we placed there. Once we realize that she’s Sin Rostro, we still don’t know who killed Zaz.

TVLINE | The other big reveal of the night was that Magda can walk, and Milos helped Petra fake her death to prove it. Does this win him any points in Petra’s heart?
Petra does not want to go back to someone who threw acid, even if he says, “It wasn’t even for you. It was for your mother.” It doesn’t sound so much better to her. [Laughs] Milos has been to anger management. He’s trying to be a better person. He comes back with something to offer, but Petra’s not somebody who’s about to start dating somebody who threw acid at her mom. So it takes a turn. It takes an unexpected comic twist.

TVLINE | And what does the reveal that Magda can walk mean for her relationship with Petra?
Petra doesn’t want to see her mother again for a while. She feels incredibly betrayed and manipulated and wants her mother out of her life. 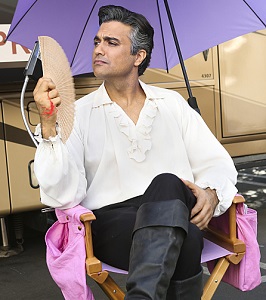 TVLINE | What’s next for Rogelio now that he doesn’t have his soap?
He’s going to have to find his next job. He’s going to find out the offers aren’t flowing in the way he expected. Then he gets an offer that is maybe not his first choice, and he has to decide whether or not to take it.

TVLINE | Are we not going to see The Passions of Santos sans Santos?
For a little while. I will never say that’s gone. It has a very special place in my heart.

TVLINE | It’s hard to imagine something topping a person being buried alive in cement.
It’s more psychological and less a crazy murder.

Jane the Virgin fans, got any theories on next Monday’s shocker? Hit the comments!