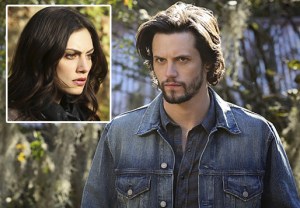 Fans of The Originals‘ hoping to see Hayley and Jackson get hitched without, well, a hitch might want to stop reading now. Nathan Parsons tells TVLine not to grab a handful of rice just yet — especially once the couple’s secrets come to light.

“We don’t know a whole lot about [Jackson’s] past,” Parsons says. “Let’s just say there’s a reason he kept this particular secret from Hayley, and I’m not quite sure how she’s going to feel when or if it finally comes out.”

Of course, Jackson isn’t the only supe with something to hide. Hayley also has her fair share of secrets — including one Klaus is particularly hell-bent on hiding.

It’s also possible that Elijah — who Parsons admits Jackson “never really liked” — will choose not to forever hold his peace. And, for the record, Parsons doesn’t really care whether fans are #TeamJackson or #TeamElijah. He’s just happy they’re choosing sides at all.

“I’m used to playing characters that get in the middle of things and cause trouble,” the former General Hospital and True Blood star says. “I don’t mind throwing a wrench into things, because at least it causes people to respond. Whether they love Jackson or hate him, that’s up to them, but he’s getting a response, and that’s all I want.

Do you support Hayley and Jackson’s union? And what secret could she be keeping (assuming it’s more than just Hope’s existence)? Drop a comment with your thoughts and theories below.