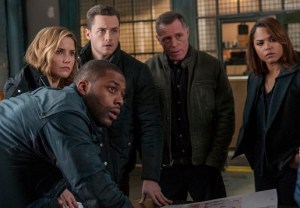 Perhaps Chicago Relationship Counseling should be the next spinoff.

This Tuesday, Chicago Fire (NBC, 10/9c) kicks off a crossover arc with Chicago P.D. (Wednesday at 10/9c) to capture the arsonist who killed Shay.

But it’s the two shows’ central couples who are igniting all the drama as Fire‘s Casey and Dawson attempt to move on from each other with new people, to varying degrees of success, executive producer Matt Olmstead previews below.

Meanwhile, Lindsay and Halstead’s new romance on P.D. threatens to burn hot and quick with her return to Intelligence, the EP reveals.

TVLINE | How is the arsonist (guest star Robert Knepper, Prison Break) going to affect both teams, especially in light of Dawson being the target on whom he sets his sights?
This was a murder. This wasn’t just an accidental fire that was set. It becomes about narrowing down who set it. Arson is difficult to prove, so it’s not a slam dunk thing of getting fingerprints and a confession. There’s some finesse involved and patience and risk in trying to get the suspect in the act or putting him in a place of discomfort where he might act out. It’s a roll of the dice. On Fire, [it’s about] the awareness this might happen and the identification of the suspect, and then the hand-off to P.D.: How are they going to actually arrest this guy when he’s proven to be fairly wily?

TVLINE | Does the fact that he’s coming after Dawson make her and Casey take stock of their relationship again?
Yeah. There’s obvious concern, which is in the DNA at this point. But they’ve been through enough and are wary enough that it doesn’t all of a sudden swing the pendulum all the way back toward a relationship, because then they’re going whichever way the wind is blowing that day. So it definitely affects him seeing her in danger, but they’re at a place right now that’s fairly firm in terms of where they’re at and cooling it off.

TVLINE | So the split is sticking for a while?
For a while, yeah. 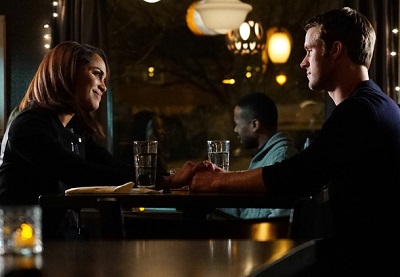 TVLINE | What’s the biggest issue for them? What do they need to get over to get back together?
To get back together, we’ll see. The biggest issue in the near future is, how do you move forward and potentially date other people when you work side-by-side? In fact, your ex-boyfriend is your boss. It’s relatable. A lot of people have done that. You can have the best intentions, you can say all the right things, you can intend to do this and that, but then it’s difficult. Finding out the person might have slept with someone or is dating someone else can be brutal. There’s this great scene coming up where Sylvie Brett is almost dragging Dawson to go out, and there’s this great conflict in that’s she’s like, “Well, we’ll do a double date, and I’ll bring Cruz,” and Cruz is like, “I can’t go on a double date. This is my boss’ ex-girlfriend.” “Well, then I’ll bring Otis. I don’t care. I’m going out with this girl. She needs to go out.” So it’s a really nice moment [showing how] your friends come in and take you out and distract you or counsel you, but it’s not easy despite what you articulate and anticipate. It’s really hard to work with someone that you used to date and love.

TVLINE | Will there be new love interests coming in for Dawson and Casey?
There will be. Nothing of the magnitude of Casey. It’s bits and starts. As she’s trying to will herself, maybe it comes a little more easily to him, initially. They’re both trying to get out of the block, so to speak, but nothing profound yet.

TVLINE | Dawson has Sylvie looking out for her. Is Severide taking Casey under his wing in light of this breakup?
He is. I saw a cut of the 14th episode, which really lays bare the other side of the breakup — there’s hurt, there’s avoiding and then there are these moments where you’re drawn together because of this case. Firehouses are safe havens for people to drop off babies. A baby is dropped off and Dawson really takes over holding on to this kid until the right mother is located. You see Casey watching her with the kid, there’s interaction, and it’s undeniably tender. But then, Severide clocks it and he advises Casey like, “You may need to get out there,” and Casey admits, “I feel like I’m chasing my tail. You’re right.” So Severide is there as a friend. 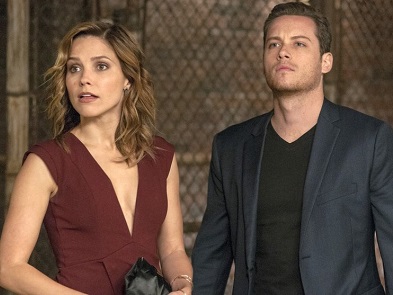 TVLINE | Turning to another couple, now that Lindsay’s back at Intelligence, how’s that going to impact her very, very new relationship with Halstead?
I just worked on the episode where the rubber meets the road, so to speak, where they have this little flirtation in the coffee room, this coy, little dance they do. He walks out with a little smile on his face and there’s Voight standing in the doorway looking at him with his arms folded across his chest, and the jig is up. Voight remembers everything and without having to come across like the exasperated dad, he just lets him know, “We’ve had this conversation. There was an exception made for Burgess because she got shot. If one of you guys want to go out there and take a bullet, fine. Until then, it’s not happening.” … It’s not this protracted, Dawson/Casey kind of dance. It burned hot and burned quick because they had no choice. Unless one of them wants to transfer out to Mounted Police, they realize they’ve got to cool it off. So they do. I can’t guarantee if they successfully completely cool it off, but they’ve got to chill.

TVLINE | You’ve mentioned before that you weren’t going to go there with Lindsay and Halstead. What made you decide now was the time? Was it the fact that you decided to split Lindsay and Severide up?
That informed it, for sure, but also just the chemistry between the two actors was apparent. Also, we just wanted to embrace the real-world aspects. You’re both single, you sit across from each other. There’s that heat when he took her to her reunion and all of a sudden now she doesn’t work there anymore. I mean, come on, 99.9% of the American population would act on that. So we did, and then she realizes that the grass is always greener, so she comes back to Intelligence and they’ve got to shut it down. How long? Who knows.