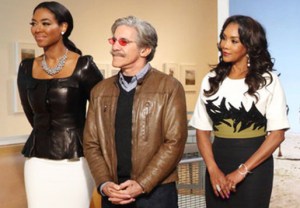 By the time the two-hour bloodbath finally came to an end, Kenya Moore, Brandi Glanville, Ian Ziering and Johnny Damon had all been sent packing. But because we’re too busy recovering from the massacre to actually recall any of tonight’s events, allow me to simply break down my thoughts on this week’s victims:

KENYA MOORE | The Real Housewives of Atlanta star served her pre-determined purpose this season — to stir up nonsensical drama, which she did admirably — but this was the perfect time for Trump to finally give Moore the boot. She rarely, if ever, brought anything to the table; worse still, her shenanigans cost several valuable players, including the strangely likable Kate Gosselin, a shot at Apprentice glory.

BRANDI GLANVILLE | Unlike Moore, Glanville surprised me with her determination and willingness to play nicely with others, the latter of which I found especially surprising. That said, she was never going to win this thing — right Giggy? — so I’m actually proud of her for making it this far into the competition. (My apologies for how incredibly condescending that probably was, but it’s how I feel.)

IAN ZIERING | Of everyone ejected from the boardroom this week — the Fateful Four, I calls ’em — Ziering clearly suffered the greatest loss. His relentless positivity, and genuine belief that he actually saved two major U.S. cities from Sharknados, could have taken him all the way. Or at least to the final three, as I truly believe this will all come down to a battle between those two ’90s news relics.

JOHNNY DAMON | I honestly forgot he was still around. Nice guy, though.

Now, only Vivica A. Fox, Leeza Gibbons and Geraldo Rivera remain — so who’s it going to be? And were the right celebs fired this week? Drop a comment with your thoughts below.