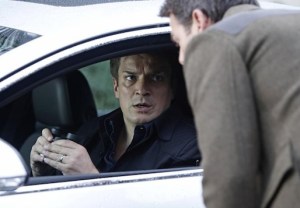 This week on ABC’s Castle, private eye Rick laid witness to his client’s own murder, leaving him with the highly difficult task of proving who (if in fact anyone) did it.

I’ve got two big issues with this episode (as well as one smaller one), which we’ll get to in a moment. But first, let’s take stock of the positives.

So, here we have our third variation on what a Castle, P.I. episode can look like. First, he essentially “raced” to solve an NYPD murder before Beckett & Co. Then, he worked a case that was tangential to the 12th’s. Here, the episode was all about Rick’s own case — the (apparent) murder of the old college friend, Eva, who hired him to prove her husband Cole a cheater — though Beckett and the boys ultimately had cause to get involved. So, three weeks in and things are still fresh, the P.I. thing is showing some legs. Nice.

Now, to us the viewers, what Castle witnessed kinda sorta screamed “set up.” Just as he arrives with the photos, she lets out a blood-curdling shriek, gets dragged through the house (though always in view of an exterior window), and then spirited away by an always-unseen “killer”? But maybe when you are there, in the moment, you’re not wearing a skeptic’s hat.

But then at a very early point — after Cole denies killing his wife, and the house shows no evidence of the bloody crime — Rick likens it all to a Hitchcock movie. (Vertigo, specifically, which winds up being rather fitting, given the killer’s long-game planning and all.)

And not once is this alluded to? He namechecks Hitchcock but doesn’t bring up “The Lives of Others”?

My other big issue is that Kate wasn’t skeptical enough about what happened, that she never really sympathized with Rick’s befuddlement — not until the very end, when she acknowledged to the boys that he’s right a lot of the time, so they should chase a new lead.

(Oh, and my minor quibble: That’s all the Brianna Brown we get?? C’mon.)

Returning to the positives, the P.I. storyline continues to light a fire under the Caskett romance/flightiness, here with the word “nap” intimating much more than a quick bit of shuteye. And the Ryan/Espo B-story was fine enough, if only because of the little “zing” Espo delivered at the end, inviting his unwanted, spoken word poet/exotic dancer Match.com date on the ski weekend with the Ryans.

What did you think of “I, Witness”?