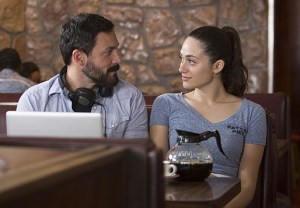 Warning: The following contains spoilers for Sunday’s episode of Shameless.

Bells were ringing on Sunday night’s episode of Shameless as Fiona and Gus impulsively decided to get hitched after only a week of dating.

The honeymoon period, however, will be cut short when they have to figure out how to tell her family the big news — and an unexpected, but familiar visitor shows up to complicate things for the stranger-like newlyweds, executive producer Nancy Pimental previews below.

Meanwhile, Ian and Mickey are facing a difficult road following his breakdown in this week’s episode, the EP reveals.

TVLINE | Was there any debate about whether or not Fiona would go through with marrying Gus?
We always wanted her to get married. If you take away her trying to keep her family together and her trying to keep afloat living in a lower-middle class environment, we do always want to explore, “What is a 24-year-old girl doing?” She has so much burden on her and so much responsibility. So we try and explore, “What if we lift that for a second?” I remember it was the second season – obviously, she was even younger then – and I was like, “You guys remember 21? I was out partying, and I was dating a bunch of guys.” That’s the season we had her working in a nightclub and testing the waters with a bunch of guys. That’s what girls are doing at that age. So we always want to make sure she doesn’t get weighed down by being a mom in some ways. And one of the things you do at that age is you’re still exploring what love is – Is this real love? Is this not real love? – and you have this crazy chemistry with somebody for a bit and you think, “Oh, my God, this is it.” Then you wake up and you’re like, “What the f–k? Who’s this? Oh, that was just endorphins or serotonin or oxytocin.” You don’t get that until you’ve experienced it.

TVLINE | How much of this is her actually falling for him versus the idea of him?
I think it’s a combination. There are so many levels to it. She definitely is high on the love drug of their chemistry and him being such a great guy. He’s so tapped into his art and his music. He’s just a good guy and she’s never really been with a good guy. It’s been a little bit of a rebound effect from Davis and from Sean, and it’s multi-layered. But she wants to believe in it and believe that she is changing her ways and she’s not going for bad boys anymore. This guy looks so good on paper. So she’s selling herself the bill of goods, too, and she believes it for the time being.

TVLINE | She’s never really had a stable environment growing up, so this feels like a chance to have that. But at the same time, she’s doing it in such a quick, impulsive way that it seems doomed to fail.
Yes, of course. But you don’t want to see that. You want to be the one that’s like, “I’m gonna do it different, and I’m breaking the mold. You’ll see, this is real love, and we’re totally meant to be.” We all want to be the one that doesn’t fall into the patterns.

TVLINE | There’s a great scene where she’s on the phone with Debbie and she realizes she doesn’t even know how to explain the news. What happens when reality sets in for Fiona and Gus?
First of all, there’s the reality of what happens with the two of them, but then outside influences come into her life, as well. She is starting this with Gus, alone, as if there were no outside influences, starting to go, “Oh my god, I don’t even know this guy. We never thought that far ahead about where we’re going to live and what we’re going to do, and am I changing my name?” and all of that stuff. [She is] realizing, “I still have my family I have to take care of, and we never even talked about this.” Then you compound that with some other people [who] are going to show up and mess up her head again.

TVLINE | Gus hasn’t had much interaction with the family thus far. Can you talk about what sort of dynamic we might see there?
She hasn’t even told the family that she’s getting married, so it’s awkward. She tells them, “OK, we’re going to have a family meeting later today, and I’m going to tell you guys something,” and they’re like, “What? Who are you? And what do you mean you need a family meeting to tell us something? What do you have to tell us?” She’s so awkward and weird and nervous about it, so she really isn’t like her true self… She’s not acting like a Gallagher. 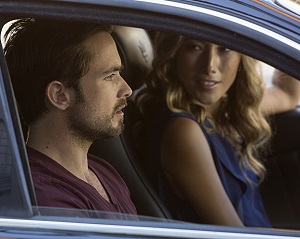 TVLINE | What does Jimmy’s return mean for Fiona’s marriage?
What it does is it shakes up her marriage, but she comes to realize that, in some ways, it’s two separate things. Yes, Jimmy disrupted her marriage, but she also knows she’s a different person now and being with Jimmy is the old Fiona. It also makes her realize that just because she disrupts her marriage, she also did make this commitment to be married and she hasn’t gotten to know Gus and she does want to do things differently.

TVLINE | Ian reached a breaking point in this episode. What’s ahead for him and Mickey? Are they going to be able to deal with 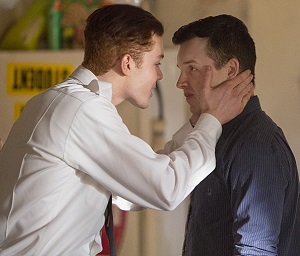 this, or is it going to get worse?
It definitely is going to get worse, but Mickey loves him and Mickey wants to try everything. Mickey’s dragged through the mud with all of this, and he really has to confront that Ian does have this problem. So he really tries to be there for Ian. He’s kind of like his nurse, but then Ian gets annoyed and is like, “What the f–k? You’re really being a p—y, walking around so delicately around me. I don’t want you to be like that. I want you to be the old Mickey, telling me to shut up and snap out of it and whatever.” So it definitely gets in the way, and they’re going through it. It gets rocky, but Mickey’s there. He’s not going away.

Shameless fans, what did you think of Fiona’s quickie marriage? Are you hoping she and Gus can make it last? Sound off below!