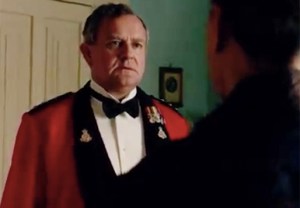 Question for the group: Are we supposed to like Robert more or less after Sunday’s Downton Abbey?

Upon catching Simon Bricker in his bedroom with Cora — Simon refused to leave, despite Cora’s pleadings — Robert became the Solange to Simon’s Jay-Z, beginning with a mighty backhand which put the would-be-seducer flat on his back. In fact, I’m quite convinced Robert would have beaten the life out of Simon, had Edith not knocked on the door in response to Cora’s shrieks of terror.

I have to admit, I kind of enjoyed Robert getting physical to defend his wife (in a very old-school sort of way), but I was considerably less impressed with the cold shoulder he gave her for the remainder of the episode. Did he not ask her what happened? Does he not think there’s a chance he overreacted? (Oh, that’s right, this is Robert we’re talking about.)

Also, can someone please explain Cora and Simon’s lingering stares? 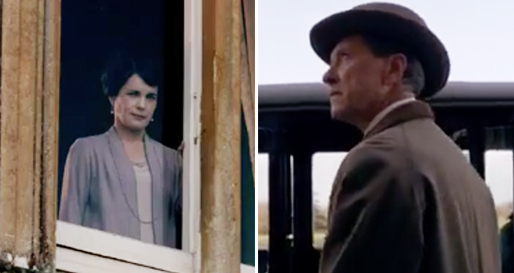 She can’t possibly be considering pursuing him now, right? (Don’t do it, Cora. You in danger, girl!)

OH, BABY! | Thanks to Rosamund’s loose lips, the Dowager Countess is now clued in to the whole Marigold situation, and the ladies’ “best” solution didn’t exactly go over well with Edith. How could they want her to send her daughter to a boarding school in France, only to see her occasionally and never reveal how they’re related? Then again, does Edith really have a choice, considering the Drewes threatened to move away from Downton at the top of the hour? Regardless of her options, Edith’s late-night phone call to London seemed to imply she’s taking matters into her own hands, whatever the plan may be. 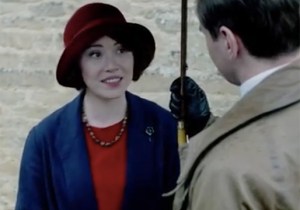 PUNTING BUNTING | Ding, dong! The witch is… not dead, but she’s moving really far away, and that’s good enough for me. Following last week’s blow-out with Robert — though not necessarily because of it — Miss Bunting announced that she’s taken a new position at a grammar school and will be leaving the area immediately. “I loved you, you know,” she told Tom before taking off. “I could have loved you more if you let me.” But if you were expecting this to inspire a “stay” speech from Tom, you were sorely mistaken. Instead, he gave her a sort of “Thanks for helping me learn more about myself” brush-off, then threw her into the car. All’s well that ends well enough, I say.

THE LEFTOVERS | Meanwhile, Mary had another unexpected encounter with Maybe-She’s-Born-With-It-Maybe-It’s-Mabel Lane Fox this week when Charles Blake invited both of Tony’s exes to dine with him. Mary made it quite clear that she has no further interest in dating Tony — much less marrying him — though Ms. Fox also didn’t seem too keen on inheriting Mary’s sloppy seconds, either. (In other news: What does Charles have to gain by reuniting Mabel and Tony?)

Final Odds and Ends:
* The inspectors returned to question Mary and Anna this week, leading me to believe — but not really care a whole lot — that Bates will eventually end up behind bars.
* Thomas looked sicker than ever this week as he continued his series of self-medicating experiments. Very worried about him!
* I miss Jimmy.

Downton fans, your thoughts on this week’s episode? Robert’s fight? Miss Bunting’s farewell? Drop ’em all in the comments section below.