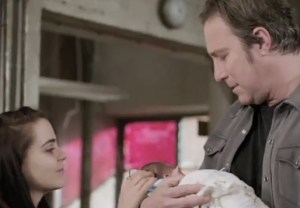 If you have any tissues leftover from Thursday’s Parenthood series finale, we’ve found a good use for them.

NBC has released three deleted scenes from the drama’s last two episodes, including John Corbett’s return as Seth, who surprises Sarah and Amber with a visit to see his grandson.

Also featured in the videos below: The Braverman kids roast Sarah for the men she’s dated since moving back home — who else completely forgot about the forklift guy from TNS? — and Ruby gives her dad some crucial fashion advice before he ties the knot.

One scene that’s absent from the extras is the meet-cute between Amber and her eventual hubby (played by Friday Night Lights‘ Scott Porter), which creator Jason Katims noted also was cut for time.

Press PLAY on the videos below for a few more moments with the Bravermans, then hit the comments with your thoughts!