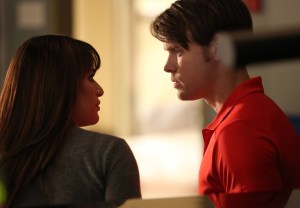 What the world… needs now… is Klaine… sweet Klaine.

That was Sue’s mantra throughout Friday’s Glee as the couple’s ultimate ‘shipper took drastic measures to get Kurt and Blaine back together. And it worked! (Well, sort of.)

Channeling her inner Jigsaw — no, seriously, she actually constructed an animatronic doll of herself based on the iconic Saw villain — Sue trapped Kurt and Blaine in a (fake) elevator with one simple ultimatum: Get down to business or get comfortable. And although the exes initially resisted temptation, instead opting to pass the time with flirty conversation, they eventually caved, going at it like I don’t think we’ve ever seen them go at it before.

The bad news, though — at least for those of you who join Sue in her ‘shipping — is that their time in the elevator didn’t exactly ensure Kurt and Blaine’s reunion. In fact, all it took was one mention of “Dave” to squash any hope Kurt had of them getting back together (even though we all know it’ll happen before the series finale cuts to black).

That said, Kurt isn’t letting his lingering feelings for Blaine get in the way of his future with Walter. Seriously, never in my life did I think I’d see Harry Hamlin playing Chris Colfer’s love interest on this show, much less enjoy their chemistry. In an alternate universe, I’d like to think Kurt and Walter could build a future somewhere — somewhere without annoying (and fake) waitresses around to pester them about their age difference. 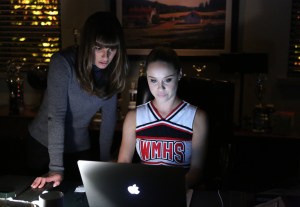 YOU SCRATCH MY BACK… | Kitty made another glorious appearance this week, but rather than maintaining her icy exterior, the former mean girl dropped her guard and admitted the real reason she didn’t want to rejoin New Directions: She’s afraid of getting hurt again once it inevitably disbands! Fortunately, a pep talk from Rachel — “the glee club needs a top bitch to keep everyone in line,” she admitted — was all it took to get Miz Wilde back on board. Even better, she came equipped with a list of the three songs guaranteed to reduce Sue to a weepy puddle of emotions, clinching a victory for the New Directions. (Side note: Sam convincing Spencer to finally join the glee club was also a major coup, though I’d be careful about comparing newbies to Finn if I were him.)

(STILL) UNDER YOUR SPELL | Just as Sue’s “invitational” competition heated up this week, so too did Sam and Rachel’s pseudo-flirtationship. I mean, Sam — though under Sue’s mind control — even referred to himself as Rachel’s “future husband,” a declaration that’s only been made once before in the series (but I won’t get into specifics, because one recap can only handle so much emotion).

This recap was brought to you by the following sponsors: “Puck’s brother, cross-dressing Mercedes and the one with the fat mom.” Happy Friday, everybody!

And now, we play the (very limited this week) rating game…
The Warblers: “My Sharona”/”You Spin Me Round” — Rating: C
New Directions: “It Must Have Been Love”/”Father Figure”/”All Out of Love” — Rating: C+

Your thoughts on Kitty’s return? Klaine’s kiss? Samchel’s… whatever that was? Drop ’em all in the comments section below.