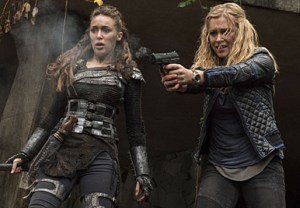 Wednesday’s The 100 threw a series of monkey (pun intended!) wrenches into the Sky People’s plans, dividing them as a group like never before.

Below, executive producer Jason Rothenberg, along with Ricky Whittle (Lincoln) and Isaiah Washington (Jaha), discuss some of this week’s biggest twists — including Bellamy and Lincoln’s uncertain futures — and offer a sneak peek at what’s to come in the later half of Season 2.

BELLAMY & LINCOLN | Let’s begin at Mount Weather, where Bellamy and Lincoln are both in dire straits. Bellamy will find himself “in a bad way,” notes Rothenberg, and he’s “not exactly going to be very helpful” as Clarke’s inside man for the time being. Meanwhile, Lincoln — who’s still very much “a drug addict,” notes Whittle — will struggle to regain control over his actions. “There’s a big conflict coming, and whether they make it out or not is a huge question,” Rothenberg teases.

MONTY & JASPER | As for the rest of the captives in Mount Weather, don’t expect conditions to improve anytime soon — or ever. Besides Monty, whom Rothenberg admits is flat-out “screwed,” Jasper will also find himself struggling to keep going: “[He’s] going to be at his wit’s end because his best friend is missing. … That’s a story for the next episode.” 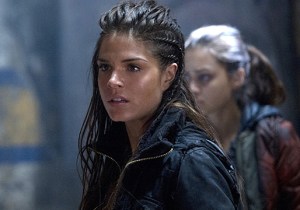 OCTAVIA | If Octavia seemed overly pleased to be offered the position of Indra’s “second,” it’s probably because she was. “In the script, it says, ‘She finally has a place,'” explains Rothenberg. “She was, ironically, a second-born child on the Ark, which meant she … had to live under the floor, essentially as a secret, so she never belonged anywhere. She’s definitely drawn to the world of the Grounders, and her arc is one of the most exciting.”

THE CITY OF LIGHT | When something sounds too good to be true, it usually is; take, for example, the City of Light, where Jaha is now leading a small group of Sky People. “It’s going to be a brutal journey,” says Washington. “You’re going to find out quickly that this journey to the City of Light is not what … you expect.” Adds Rothenberg, “All 12 won’t make it to the end of the line.” (Gulp!)

THE ICE NATION | As if there weren’t enough potential enemies for the survivors to worry about, enter… the Ice Nation! “[They] will definitely play a role in the bigger story, but maybe not for a while,” says Rothenberg. “They’re part of the Coalition. There are 12 Grounder clans, and right now, the Ice Nation — despite what Lexa said they did to her girlfriend — [was] brought to the table anyway.”

100 fans, who do you think will be the next to die? And how are you feeling about the show’s (many) new directions? Drop a comment with your thoughts below.