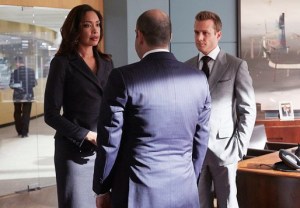 USA Network’s Suits returns tonight at 10/9c with Louis hell-bent on getting name partnership in exchange for his silence about Mike’s bogus background.

But to give him what he wants would be like giving in to the demands of “a power-hungry, power-crazed person,” executive producer Aaron Korsh warns.

While Jessica and Harvey figure out how to keep Louis in check, professionally, the personal fallout of having been lied to for years takes it toll on his friendships with Rachel and Donna.

The EP also foreshadows a world of hurt for Mike and previews Harvey’s “major” journey.

TVLINE | Because you had such a big cliffhanger at the end of last season, are you picking up right where you left off?
We are picking up very shortly, yes, after we left off. Louis dropped a huge request, and we’ve got to answer that request. We’re going to see what happens in the immediate aftermath of Louis’ bomb being dropped. 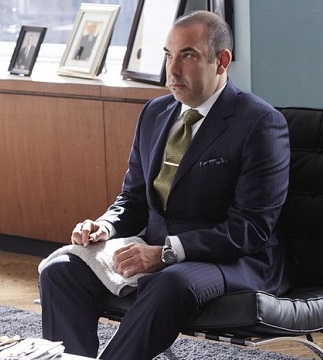 TVLINE | Is the question of whether or not Louis is going to get the partnership answered right away? Or is it drawn out throughout the hour or a couple of episodes?
The answer to that question is a little bit complicated. You can’t just always say yes to a child’s demands or maybe to a dictator or a hungry, somewhat of an unhinged person. [Laughs] If you say yes immediately to what they want, they’re just going to want more. So that’s a little bit of a game that our characters need to play. They can’t just appease Louis because to appease Louis would be to give a power-hungry, power-crazed person exactly what they want. It would never end.

TVLINE | How does Jessica respond to it? We didn’t see a lot of her reaction in the finale.
Jessica is a complicated, powerful woman, and she’s, in the past, very much stated and lived by [the stance that] she doesn’t respond well to threats. On the other hand, she’s not an idiot. [Laughs] She understands the situation that she’s in, so she’s going to have to balance her rule that she lives by [and] the fact that she’s got a loaded gun pointed right at her head. She’s going to try to walk that line throughout the course of the episode and, to some degree, the next several episodes.

TVLINE | Is Louis going to use Mike’s secret in other ways, not just in trying to get name partnership?
We’ve been through many, many battles for control of the firm over the years – and not that I’m not a fan of them, because I’m a big fan of battling for the throne, so to speak – but in these last six [episodes], we try to focus on more of the personal dynamics that are going to come out as a result of Episode 410 and not as a much the power dynamics of the firm. That’s not to say that we didn’t focus on the power dynamics of the firm at all. We absolutely did, but we’re really focusing a little bit more on what are the personal betrayals or the personal costs of keeping the secret, the toll that its taken on the six members of our cast.

TVLINE | Whose relationship is damaged the most given the fallout from the finale?
I think it might depend on probably whatever character you ask. They might say that their relationship was damaged the most… We’ll see in the first episode that there’s a little bit of a fallout in Harvey’s life. Jessica has some fallout. Mike and Rachel will have some interesting fallout, different than you might expect. 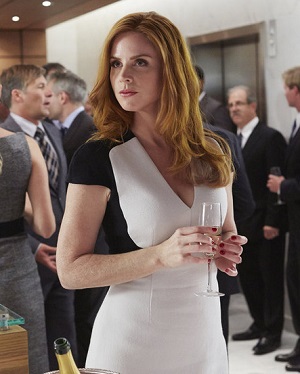 TVLINE | How is the friendship between Donna and Louis faring in the new season?
It’s going to have to go through a process. He feels utterly, utterly betrayed by Donna, and I would say probably the wound is the deepest with Donna because she was the one that he probably feels most close to. But he also feels wounded by Harvey, Jessica [and] Rachel. Rachel helped Mike deceive Louis in Season 3 when Louis almost found out, and Louis and Rachel have a special relationship. Obviously, Louis and Mike have always had an interesting relationship with a lot of moments of real connection. Maybe Donna is the most hurtful because Louis was the closest with her, but it is Mike’s actual secret, and he’s certainly going to take some vengeance out on Mike.

TVLINE | What’s the arc for Harvey in the back six episodes?
In the beginning, Harvey is, obviously, reeling and responding to the Louis fiasco. Harvey goes through a lot through the last six. He gets a visit from his old friend Professor Henry Gerard and that brings up some interesting stuff. Harvey has a chip on his shoulder about this guy and I found that interesting. I’ve never really seen that before [with Harvey] because it’s a person that he wants their respect and he doesn’t necessarily have it. … The last two or three [episodes] really focus on Harvey in a major way in terms of his relationships with some of the key people in his life [and] culminate in the finale, which [reveals] how Harvey came to be the guy that he is.