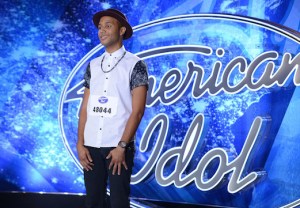 As the fathers of soon-to-be 4-year-old twins, my husband and I have a perpetual fascination with the “Stanford marshmallow experiment.” For the uninitiated, I’m talking about a psychological test from the late 1960s in which children were offered the choice of one fluffy, white confection or — if they were willing to sit unattended in a room with said snack for 15 minutes (and not devour it) — the reward of two tasty treats.

“Oh Em Gee, Slezak, but what does this have to do with American Idol?!” you ask.

See, I’ve got a theory. The producers of The House in Which Caleb Johnson Is Currently Squatting — too mean? too soon? sorry! — might be rewarding those of us willing to delay gratification when it comes to our reality singing competitions.

Too many times in the course of Season 14, our audition episodes have opened with some combination of weak/bleak/unfortunate freak, and saved musically satisfying hopefuls for later in the hour.

It’s a peculiar style of pacing — especially for a show whose ratings dominance isn’t what it used to be. But for those of you who weren’t licking marshmallow residue off your fingers during the first 10 minutes of this Wednesday’s installment — an interminable interlude focusing on a practiced-ly kooky teen — the reward turned out to be significant.

I know, I know… we’re not a bunch of toddlers whose impulse-control needs to be measured to determine future successes. I mean, shouldn’t we have all marshmallows all the time? But in the absence of logical explanations, this is my working theory. I’ll leave it for you to rehash and debate, and in the interim, rank tonight’s nine Golden Ticket recipients from least- to most-promising:

9. Katherine Skinner, “Shake It Out” | Aforementioned teen will be remembered more for her gold lycra pants, “pimp coat” and irksome insistence that her psychic cat told her to try out than her talent-show-level vocals. Why the judges were charmed by the sound of her thin vocals stretched across Florence +The Machine’s vast melody is as much a mystery as Idol grads Katelyn Epperly and Alexis Grace‘s new singles not cracking the Billboard Hot 100 already.

8.Erika David, “No One” | The white ceiling paint of this audition episode — perfectly serviceable but ultimately indistinguishable from so many that have come before it.

7. Andrew Bloom, “Too Close” | Handsome guitar-playing troubadour’s B/B- twist on a frequently covered audition jam got overshadowed by the presence of his pal, Olympic silver-medalist Ryan Bailey*. (*Also a Gold Medalist in hotness.)

6. Reno Anoa’i, “I Don’t Want to Talk About It” | J.Lo’s critique was spot-on. Ukelele-strumming teen sounded authentic and haunting when he sang a straightforward melody — but he stubbed his toe, musically speaking, making wonky attempts at R&B-tyle runs.

5. Kellyeann Rodgers, “A Song for You” | Producers only gave us a snippet of this chick and her red Spandex pants, but she showcased great control and phrasing in limited airtime.

4. Chandler Leighton, “New York State of Mind” | If she cracks the Top 24, she might face a copyright infringement lawsuit from Leighton Meester, but this hat-wearin’ blonde’s restraint on an often overbaked ballad was really impressive.

3. Maddie Hudson, “Resentment” | I heard a few imperfections in this high-school student’s Beyoncé cover, but the cry in her voice — and her moody-but-not-melodramatic expressions — really sold the song in a way that not a lot of 16-year-olds can. Did the dramatic lipstick application help, I wonder?

2. Ryan Pinkston, “As” | Got montagedalong with Chandler and Erika, but as Harry noted, the dude’s pitch was “pinpoint perfect” — especially impressive considering he was nailing some tricky rhythms without a second of musical accompaniment.

1. Rayvon Owen, “Wide Awake” | Soulful 23-year-old with occasional Kris Allen-y side-mouth delivery performed a stupendous balancing act: His Katy Perry cover contained some of the breathy tendencies of modern R&B singers without ever losing power or purpose. Plus, he’s got a delectably silky tone and an instantaneous ability to get you swept up in the story he’s telling. OK, Rayvon, I’m wide awake. What are you gonna do next, sir?

On that note, let me pass the mic to you. Who were your faves from Night 1 of the Season 14 San Francisco auditions? Take our poll below, then hit the comments with your thoughts!